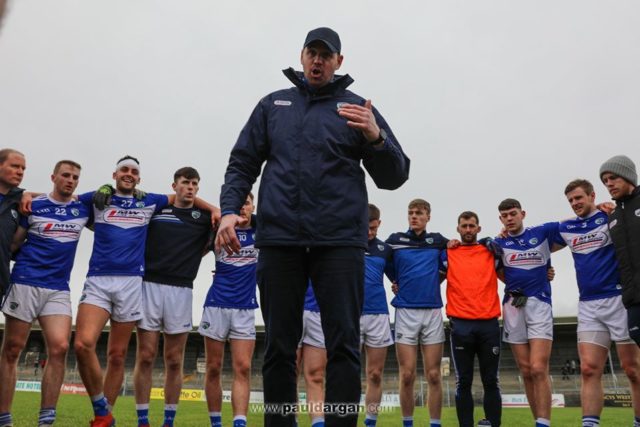 The Laois football team to take on Kildare in Round 5 of the Allianz Football League has been named and shows one change from the side that beat Clare in Ennis last week.

Laois are in action for the third week running and manager Mike Quirke has brought Courtwood’s Sean O’Flynn back into the starting team in place of the injured Cahir Healy.

Healy, who picked up a knee injury in the opening half last week, is awaiting a scan to determine the extent of his latest setback having suffered two cruciate injuries in the past couple of seasons.

O’Flynn, who will be part of the Laois U-20 team that take on Dublin in next week’s Leinster final, is named at wing-back with Graiguecullen’s Trevor Collins moving back into the corner.

Having been previously named at full-forward but played mostly at midfield, captain Kieran Lillis is named at midfield on this occasion alongside John O’Loughlin.

The attack is unchanged from the side that beat Clare last Sunday, meaning no place for U-20 player Mark Barry who has had a very busy schedule of late.

Laois currently sit on five points in Division 2 after four games, just one point off leaders Cavan and three clear of Kildare, Clare and Fermanagh at the bottom of the table who are all on two.

Laois have already recorded wins over Armagh and Clare. They drew with Roscommon but lost to Cavan.

Under former All Ireland winning Kerry manager Jack O’Connor, Kildare won their first game against Fermanagh but have since lost three games in a row – to Clare, Armagh and Roscommon.

But they’ll be hoping to continue their good record against Laois in a fixture Laois haven’t recorded a win in since 2010 and have only one of the last 10 league or championship meetings between the counties.