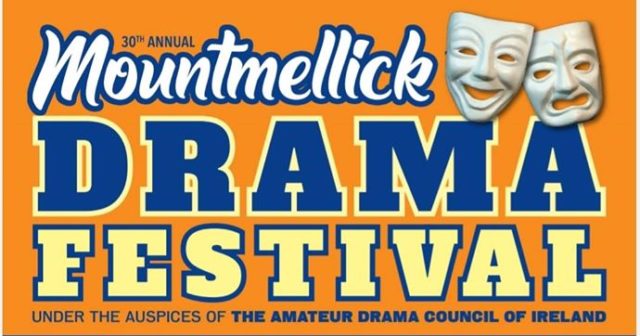 The ever-excellent Mountmellick Drama Festival kicks off this Friday, March 6, with a week-long schedule of productions from groups all over the country.

In the newly refurbished Community Arts Centre and with a line- up of plays from both Irish and international playwrights it promises to be thrilling week.

The Festival is firmly established as the premier event in the Laois and Midland’s Theatre calendar.  Running over eight consecutive nights the Festival has become a “must include item” in the plans of all lovers of live performance arts.

This year’s event promises to be spectacular as the country’s best amateur drama groups descend upon the newly refurbished Community Arts Centre.

Patrons will be taken through an epic theatrical experience spanning Tragedy, Comedy, Drama and much more as they delve into the rich programme of plays on offer.

Palace Players  from Cork make a return to the Mountmellick stage with Christian O’Reilly’s beautifully written and poignant Chapatti by Christian O’Reilly as do Wexford Drama Group with the modern and slick Closer By Patrick Marber.

Closer is suitable for an Adult audience only – over 18s. Rugby fans will enjoy Alone it Stands by John Breen retelling the tale of Munster’s historic win over the All Blacks in 1978 with the cast of seven playing a total of 62 characters.

Always mindful of encouraging new writing the Festival committee welcome Duleek Players for the first time to Mountmellick with their production of The Blacksmith, written and directed by Michael Ferguson –   a non-stop comedy celebrating our unique Irish Folklore Heritage.

All the way from Mayo, Clann Machua bring their own interpretation of John B. Keane’s Sive which needs no introduction.

If the abstract settings and mythical theme excite then don’t miss Dalkey Players Eurydice by Sarah Ruhl which promises to enthralling.

Bookending the week are Mullingar Theatre Lab who will present One Flew over the Cuckoo’s Nest and Glenamaddy Players with Martin McDonagh’s The Cripple of Inishmaan both of which are already proving popular at the box office.

There is truly a play to suit all tastes and age groups. John Mulholland, CEO of Laois County Council, will perform the Official Opening on Friday, March 6.

Mountmellick Drama Festival Committee are delighted to have been chosen to host the All Ireland Confined Drama Finals of 3 Act plays in 2022.

This is a huge honour and plans are well under way to make it a great event for Mountmellick and Laois. Now is an excellent time to join the mailing list, become a Season Ticket holder or become a sponsor or patron.

The Festival is renowned nationally as the friendliest theatre event on the circuit. The hosting committee will greet you each evening and are available to attend to your every need.

You will have the opportunity to chat about the show over light refreshments and the interval and post show banter that takes place each night is theatre in itself.

It is not unusual to see audience, performers, adjudicator and festival staff submerged in discourse long after final curtain.

Ticketing is fully flexible and whether you are a seasoned theatre goer with the stamina to take in all eight nights, a short-term visitor with the need to fill just one night or anything in between, our box office will put together a value for money deal for you with concessions available for both season and single bookings.

The full schedule is

One Flew Over The Cuckoo’s Nest – Mullingar Theatre Lab

The Cripple of Innishmaan – Martin McDonagh