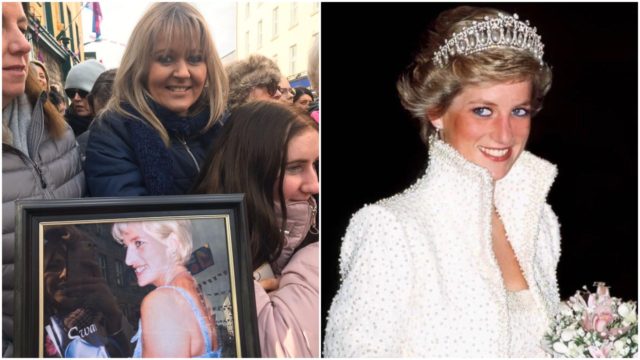 A Laois woman has travelled to Galway this afternoon in the hopes of passing on a photo she took of the late Princess Diana to her son Prince William.

Michelle Rogers, from Abbeyleix, photographed Princess Diana for eight years and saw her last six weeks before she died.

Prince William and Kate are currently on a three day visit to Ireland and have made their way to Galway.

Michelle is currently in the crowd where she wants to pass on a photo she took of Diana in 1997 at the Royal Albert Hall.

Michelle moved from Abbeyleix to the UK in 1989. She trained and worked there and in her spare time, she began photographing Princess Diana.

Speaking to LaoisToday in 2017, Michelle said: “The first time I photographed her she was visiting the theatre near where I worked.

“A handful of us stood out in the pouring rain for three and a half hours just hoping to catch a glimpse of her. When she came out and talked to us I couldn’t believe it,” said Michelle.

“The photos from that day are terrible. I was shaking so much i couldn’t get a clear one!,” she laughed.

Michelle met Diana a further 36 times. “I always bought a copy of Majesty magazine, which published all the royal engagements a month in advance. She began to recognise me,” said Michelle.

Michelle even has photos of herself and Diana together.

“I was always a huge fan of her. My mum gave me a book about Princess Diana’s and Prince Charles’ Royal Wedding in 1981 and since then I always admired her,” she said.

“All the adjectives to describe Diana don’t do her justice,” said Michelle. “She was always described as being beautiful but until I saw her I didn’t realise just how stunning she was.”

“She was charismatic and down to earth. She had this appeal -when she spoke to you, you felt like you were the only person that she was talking to. She was incredibly funny and just put people at ease,” said Michelle.

The last time Michelle saw Diana was six and a half weeks before her death. Michelle says that around this time, she saw Diana, “really come out of her shell.”

We hope the pair can meet.

Michelle Rogers has travelled from Co Laois to Galway and hopes to give William a photo she took of Princess Diana in 1977 at the Royal Albert Hall. She has met Diana 37 times #RoyalVisitIreland pic.twitter.com/xLqQkCFkGq