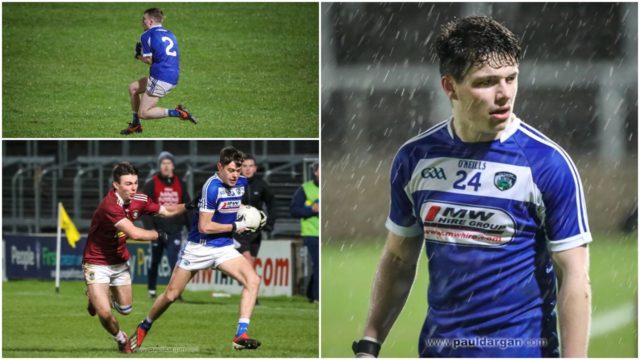 We’re back in Netwatch Cullen Park tonight as the Laois U-20 footballers take on Dublin in the final of the Leinster championship.

The game throws in at 7.30pm in Netwatch Cullen Park, Carlow.

Unsurprisingly, the manager has named an unchanged team from the side that defeated Kildare in the semi final two weeks ago.

That means senior players Sean O’Flynn and Mark Barry are included as well as Portarlington’s Colin Slevin, who returned from suspension to play a key role in that win over Kildare.

Dublin have not yet named their team but their manager Tom Gray has had plenty to say:

“Preparation is going very well. We’re happy with the last 10 days since we played Meath”

Laois got a bye through the first round but the Storm Ciara meant their quarter final clash with Westmeath was postponed by two days.

That game went all the way to extra time and then penalties where Damon Larkin converted the winning kick to seal passage to the next round.

Dublin have blitzed through this championship with routine wins over Wicklow, Longford and Meath to come into the final as favourites.

When did Dublin and Laois last meet at this level?

This Friday’s game is a repeat of the decider between the two sides last July.

After that, their most recent clash came in 2012 in Parnell Park when Ciaran Kilkenny ran riot as Dublin won their quarter final clash by 2-21 to 0-4.

Before that, you have to go back to the 2009 Leinster final where a Jim Gavin managed Dublin defeated Laois in O’Moore Park by 0-12 to 0-9.

What do we know about this Dublin team?

Laois played Dublin in a Leinster U-17 football championship semi final in 2017 and the main scorer on this team was in action that night.

Ciaran Archer kicked 1-10 that night as Dublin ran out 1-16 to 1-14 winners to advance to the Leinster final.

Amazingly, he is the only Dublin player who featured that night in O’Moore Park that started in the win over Meath two weeks ago.

But there are some known faces on this team like Adam Waddick who was Dublin minor hurling captain in 2019.

Lee Gannon was a member of the Dublin Senior Hurling squad in 2019.

While Castleknock clubman Luke Swan made himself known to Dublin fans in 2018 when he flourished in the Leinster Minor Championships.

Then, at the age of 16, Swan amassed 13 goals and seven points across both the Football and Hurling Championship in 2018 (11 games). That included 3-1 in the Leinster Minor Hurling Final, helping his side to Championship silverware.

If Laois win, they will face the Ulster champions Donegal or Tyrone in the semi final in Croke Park on St Patrick’s Day. Tyrone are the corresponding U-17 champions from three years ago and their star man is Darragh Canavan, son of former Tyrone great Peter.

Kerry, who are managed by former Laois senior boss John Sugrue, beat All Ireland champions Cork in the Munster final on Wednesday night and will play Galway or Roscommon in the All Ireland semi-final on St Patrick’s Day.

TG4 will have live coverage of the game. As always, LaoisToday will be live blogging the entire game.