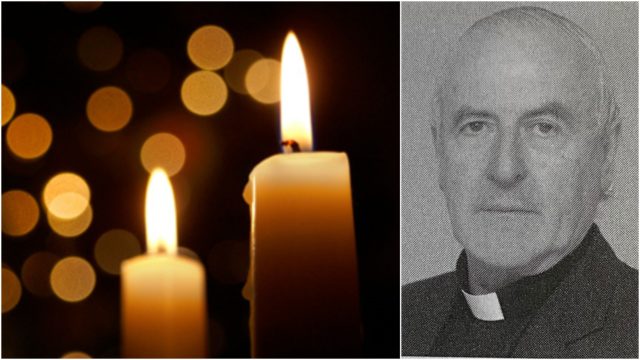 The death has occurred of Monsignor John Fitzpatrick, a Mountrath man who worked in the Dublin diocese for many years but who had retired to Laois in recent times.

Monsignor Fitzpatrick worked in Sutton in Dublin for a number of years before retiring to his home place of Deer Park, Mountrath, and helping out in Camross parish.

Sadly, his death comes just over a little over a month since the passing of Fr John Lalor, parish priest in Camross, who worked closely with Monsignor Fitzpatrick.

He celebrated mass in Killenure every Sunday morning at 9am and a close association with the Killenure school also.

Monsignor John Fitzpatrick is a former Episcopal Vicar and former Moderator of the Sutton, Howth and Baldoyle Grouping of Parishes.

Requiem Mass will be celebrated for the repose of the soul of Monsignor John Fitzpatrick in St. Fintan’s Parish, Sutton on Wednesday 1 April at 11am.

Due to present restrictions, the funeral will be private –  for the family only. There will be a principal celebrant only and no concelebration.

It is hoped to have a Memorial Mass in the future when circumstances make it possible.

Parishioners in Sutton have expressed a wish to mark Monsignor Fitzpatrick’s passing by inviting fellow parishioners to switch on the front lights in their homes between 9pm and 10pm on Tuesday evening.

Monsignor Fitzpatrick died peacefully in the wonderful care of the Blackrock Hospice after a short illness borne with faith and conviction.

Son of the late Thomas and Josephine Fitzpatrick, Deer Park, Mountrath, he is deeply regretted by his brother William, his sisters Mary (Mullally) and Josephine, sister-in-law Ann, brother-in-law Pat, nephews, nieces, grand nephews, grand nieces, the Archbishop and Priests of the Archdiocese, relatives and friends.

SEE ALSO – Burglaries in Errill and Ballybrophy, suspicious behaviour in Stradbally and insane speed on M7