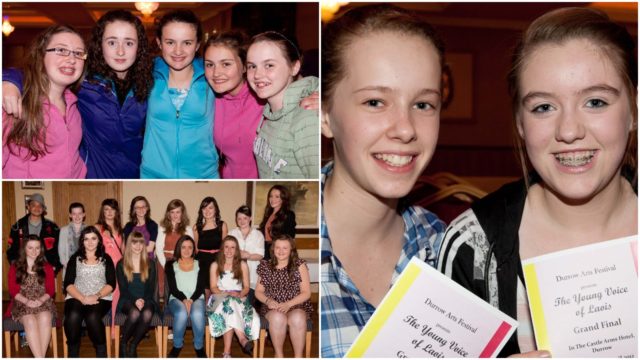 The Young Voice of Laois Final took place in the Castle Arms Hotel in Durrow in April 2012.

In its third year, the new Young Voice of Laois was found in 17 year old Abbeyleix singer, songwriter and guitarist Michael Kirkman.

The fifth year student of Heywood Community School at the time received a Voice Training Scholarship sponsored by the Laois School of Music.

He was presented with the Ronan Lawlor Memorial Perpetual Trophy, a special award sponsored by by the Lawlor family in Durrow in memory of their son, a talented musician who died tragically aged 28 while climbing in South America in 2007.

Highly commended on the night were Dearbhala Dunne, 16 from Mountmellick and Emma Conroy, 18 from Camross.

In third place was Bronwyn Dunne, 16, a fourth year student in Heywood CS at the time, and in second place was Sarah Luttrell, 16 from Ballybrittas.

Alf Harvey was there on the memorable night and he took some great pictures.