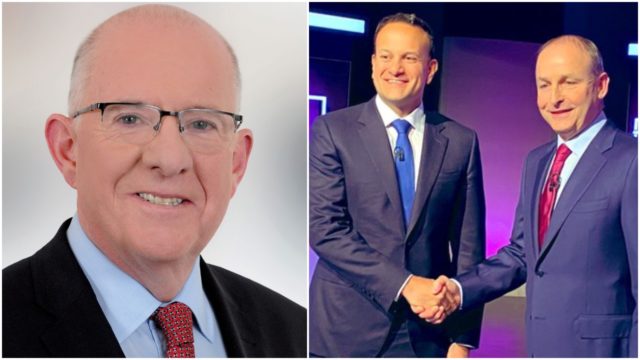 Laois TD and Minister for Justice Charlie Flanagan has welcomed the coming together of his own party, Fine Gael, and Fianna Fail in a bid to form a government.

The two ‘Civil War parties’, who have been opposed to each other for more than 90 years, officially buried the hatchet yesterday as they released joint policy document that could pave the way for the formation of a government.

In a wide-ranging interview with LaoisToday, Minister Flanagan discussed the policy document and why he believes it is good for Laois, ruled out any deal with Sinn Fein and called on a third party to get involved.

Minister Flanagan says that as the Coronavirus pandemic continues to turn our lives upside-down, the country needs a stable government and that he believes this is the best way to achieve that.

He said: “The Election (in February) seems a distant event at this stage because so much has happened since.

“A lot of the economic pillars that were here in January are no longer there but I think it is important that there is a majority in the Dail.

“We need a stable Government and the only way we will have stability is with a third party.

“I would like to see a new deal for the Irish people which would build on the lessons that were learned from the Election in terms of what people said and the message we received on the doors.

“So that is why I think the coming together of Fianna Fail and Fine Gael is not only important, but it is to be welcomed.

“This is not a done deal and there is still a lot of work to be done. But in terms of what I am reading now, I see a lot of positives and I think we have to build on that.”

But now as Flanagan’s party looks set to do just that, or at the very least share control of the economy with Fianna Fail, he says that the outcome of the election has necessitated this.

Minister Flanagan also says a third party is needed and believes there is a role for the Green Party.

He said: “I said, just a couple of days after the election, that what was needed was a new deal for the Irish people.

“I felt that that new deal would have to involve two of the three big parties (Sinn Fein, Fianna Fail and Fine Gael).

“And that they would also have to come together with another party. And I still believe that there is a role for the Green Party here.

“And I also believe that everyone who was elected in a General Election should aspire to serve in government. I don’t think it is sufficient for up to half of the Dail to say, ‘we’re going to opt out, we’re not going into government, we’re going to stay in opposition’.

“I don’t think the political system is designed for that. People say that there needs to be an active and robust opposition – and that may be true.

“But there also needs to be an active and robust government which is where I am coming from.”

While Flanagan stressed the need for a third party, he categorically ruled out that Sinn Fein would be it.

He said: “No, not with my party, not with Fine Gael.

“I will not serve in government with Sinn Fein. I made that clear before the election, during the election and after the election.”

Looking at the document as a whole, which can be viewed in full at the bottom of this article, Minister Flanagan picked out Section 6 as being particularly good for the people of Laois.

This is all got to do with quality of life and sets out a range of measures aimed specifically at commuters – thousands of whom leave Laois for work everyday.

He said: “While this isn’t a programme for government, it is certainly a framework document and I think there are a lot of positives in it.

“Leaving aside any justice elements or issues to do with my cabinet portfolio, I am very impressed by the section on quality of life (Section 6) and its particular reference to commuters.

“This was a huge issue in Laois during the General Election and it is something that needed to be prioritised. I had been speaking to the Taoiseach about this and I am pleased that this is there.

“Of course it has to be built upon. It is a foundation document and not a finished article. But I look forward to that happening with my own party and other parties in the coming weeks.”

You can read the policy document in full below:

1. Reigniting and Renewing the Economy

6. A Better Quality of Life for All

8. Opportunities through Education and Research

10. At the Heart of Europe: Global Citizenship