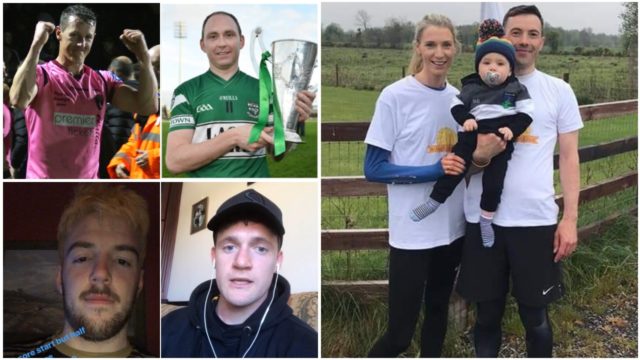 The past weekend saw a huge milestone in the ‘Do It For Dan’ fundraising campaign reached and more fundraisers are planned to keep pressing on.

In just 46 days, more than €1.1 million has now been donated to little Dan Donoher in his bid to get access to life-saving treatment.

But much more still has to be done and so two very well known Laois men have teamed up to run a marathon.

The Portlaoise and Durrow natives, who both work together as prison officers in the Midlands, will run 42km.

Aidan explained: “We will be starting from our work place, the Midlands Prison, and doing the 5k route around the Borris Road 8 1/2 times starting at 10am on May 24.

“Neither of us are ‘runners’ and we would love people to come out and join us, social distancing being obeyed, for a lap and to raise as much money as we can for little Dan.”

Portarlington and O’Dempsey’s challenge each other

GAA clubs all over the country are currently hosting runs in support of Dan with over €100,000 raised.

And more are planned for this coming weekend with four clubs planning to do a range of different challenges if they reach different targets.

O’Dempsey’s and Portarlington are both gearing up for their big runs this weekend and have set each other separate challenges.

O’Dempsey’s Matthew Finlay explained: “O’Dempsey’s are doing a shave or dye for Dan and now that we have hit €8,000, I’m going to dye my hair the Portarlington colours live on my Instagram at 9pm on Wednesday. 13 others have agreed to do the same and they will join me on the live feed on the night.

“While the Portarlington lads, Robert Pigott, Colin Slevin, Colm Murphy, Diarmuid Bennett, Ronan Coffey and Jake Foster will all be wearing our jerseys for the Portarlington run on Saturday if their club fundraiser can hit €7,000.

Walking 1km on his hands!

In Ballyfin, club man Eamonn Duff has pledged to walk one kilometre on his hands if they can get their total up to €5,500.

Former Laois minor manager Donncha Phelan explained: “Eamonn Duff has pledged to not only to run 5km but also to walk 1km, yes people 1000 metres, on his hands if we get our total to €5,500.

“This is an incredible gesture by Eamonn. Get donating people. We just have to see that happen. We might even get a Live Feed on it!”

Over in Clonaslee, one of their proudest sons has worn a dreaded Offaly jersey to work in aid of Dan.

Tommy ‘Horse’ Tynan lived up to his word and donned the jersey after they hit €5,000 and funds have flooded in since.

Away from GAA, a local soccer club has also launched its own fundraiser.

Mountmellick United are going to run an online poker tournament on Saturday May 3 at 7pm with 75% of the proceeds going to Dan.

You can register as follows and those who can’t play are asked to donate below.

And finally, we will end with a wonderful poem from O’Dempsey’s man Daragh Meredith.