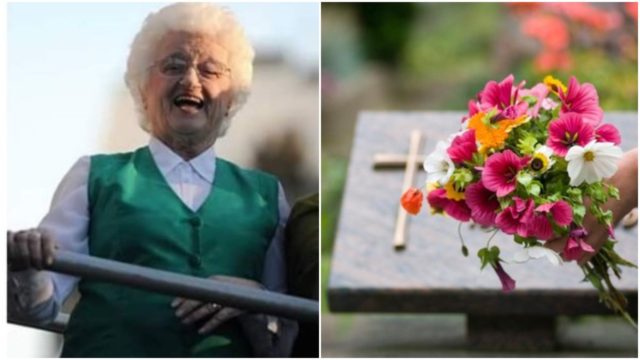 The late Alice Kennedy was laid to rest in her native Clonaslee this week.

The Laois woman, who was a leading and prominent member of the London-Irish community, passed away in London on April 1 after contracting Coronavirus in March.

The 83-year-old is fondly remembered by those who knew her. 58 years ago, Alice moved from Shracullen to Kentish Town and became heavily involved in the Irish Elderly Advice Network and the Irish Pensioner’s Choir.

She spent time as chairperson and vice-chair of the two organisations respectively and touched the lives of many Irish people living in the English capital.

Alice’s many friends in the UK were unable to travel to the funeral in Clonaslee due to Covid-19 restrictions but they did record the song ‘Going Home’ which is played in the RTE clip below.

He said: “Alice was a marvelous person and I am very proud of her. She was unbelievable craic.

“She loved dancing and music and devilment.”

He said: “Alice will be remembered by London’s Irish community as their greatest advocate.”

Alice is predeceased by her husband Frank who was from Lorrha in Tipperary.

She is sadly missed by her sorrowing brothers Michael, Seamus, and Christy, nieces, nephews, grandnieces, grandnephews, relatives and a large circle of friends in London and Ireland.

May Alice Rest in Peace.

SEE ALSO – WATCH: Donohers thank the public as ‘Do It For Dan’ goes above €1.5 million