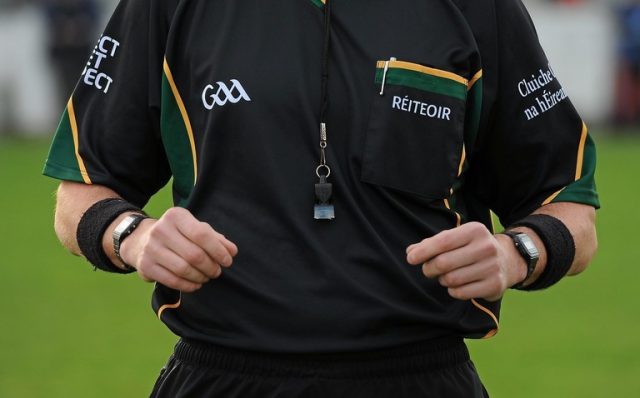 This piece originally appeared on LaoisToday in April 2018

But you can’t deny that referees exist in every sport and the world over they are a source of constant frustration to players, officials and supporters.

We’ve put together a list of the refereeing habits that drive everyone absolutely crazy altogether.

You know the type. They’re the boss and they’re dead set on making sure everyone knows that too. They’ll give a free for everything, as if they’re playing some type of Referee’s Bingo.

End up giving so many frees and cards that they walk themselves into bother by sending off someone for nothing, forgetting to send them off at all or fall guilty of one of the biggest refereeing sins – being accused of “causing a row”. Will have everyone wound up to the last.

The complete opposite of the lad above. Will give frees for nothing and will only blow the whistle a handful of times in the game. Most backs like a referee like this as they’ll maul and harass their man all day long and get away with it.

But everyone usually gets frustrated with this style too and frustration generally boils over after some poor unfortunate gets butchered once too often and snaps.

3 – Blowing for one thing and only one thing

They’ll have heard Brolly or Spillane or O’Rourke on the Sunday Game saying that referess should clamp down on a certain rule. And whatever gets into their head they’ll go out and referee a game using that rule and that rule only.

It might be something like enforcing the closed fist pass and they’ll give frees for throw balls all day long – while all the time ignoring every other rule in the book.

4 – Throwing it up endlessly

Another head-exploding one. Instead of giving a free in one direction or another, they’ll cop out time and time again. Invariably this only makes things worse, especially if things are getting heated.

The sensible thing to do would be to give a free and get the ball as far away from the troubled area as possible. But no, they’ll see the best option as another throw-up. He only has himself to blame when it ends up in a thunderous row with most of the players on the pitch all converged on the same spot for his umpteenth throw up.

The GAA actually proposed a rule to allow frees be brought up 50 metres for dissent to a referee – but the boys in Congress didn’t think that was a good idea (despite the amount of other shambolic options they’ve let through).

But some referees implement their own version of it when they decide to bring a free forward. They literally signal they’re bringing it up and sprint on about 30 metres, more than twice the regulated 13 metres. They obviously count in their head rather than the steps they’ve taken.

6 – Being all pally with the county men

You see this all the time. Laughing and joking with the big names before the game or when there’s a stop in play.

The county men are cute. They’re charming their way around the refs and they’ll get every handy free going and know if they’re nice to the ref they can essentially do what they want on the field. Sure he’d never put a county player off.

7 – Playing loads of (or none at all) additional time

Some referees have a sort of work to rule approach. Each half is 30 minutes and that’s all they’re there for. There could be half an hour of a stoppage but they’ll play 30 seconds injury time.

On the opposite end of the scale, you’ll have the lad who’ll add time on for everything – and insist on playing it all no matter what. A team could be ten points down but he’ll make sure that the nine minutes of additional time are played rather than blowing it up and letting everyone go on home with themselves.

8 – Not acting properly when obviously seeing a blatant offence

Someone will punch someone in the face right in front of the referee and everyone knows he’s seen it. He then confirms he’s seen it by talking to the player – and giving him a yellow card. Because striking with the hand is a yellow card obviously.

Our advice here is simple: either give the red that he deserves or pretend you didn’t see it at all.

You could get your jersey pulled and a dunt in the head when in possession right in front of the referee. You’ll then lose the ball, watch your opponent pick it straight off the ground, throw it to his team-mate who’ll over carry it and double hop it. The referee will give a free for none of that.

But he’ll then spot something between the corner-back and the corner-forward 80 yards off the ball and give a free in. It’ll be so innocuous that both the defender and forward are wondering what it’s for.

Again our advice here is pretty straight forward: until you can see the frees in front of you, don’t start giving ones that you aren’t even close to. You’ve enough to be doing without that.

Rant over. And to all the referees out there, we’re sorry. Sure what would we do with you.