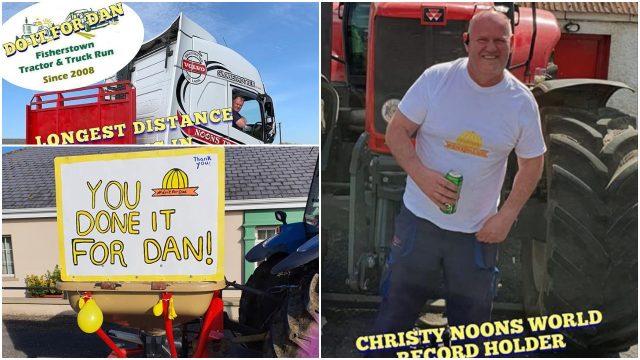 A Laois man is the holder of a new Guinness World Record following an incredible feat at the weekend.

A transport company teamed up with a local tractor run in an attempt to break a world record in aid of Dan Donoher on Sunday May 3.

Ballybrittas company, Noons Transport, ran by Christy Noon is linked up with the Fisherstown Tractor Run.

On Sunday May 3, they attempted to exceed the World Record Distance by reversing more than 64 km.

And now only did Christy get 64km, he smashed it by 8km.

Christy reversed 72km around Ballybrittas and he completed it in 4 hours and 3 minutes.

And in doing so, Christy managed to raise more than €7,000 which went straight to the Do It For Dan fund.

The GoFundMe Page has now closed after going above €1.9 million.