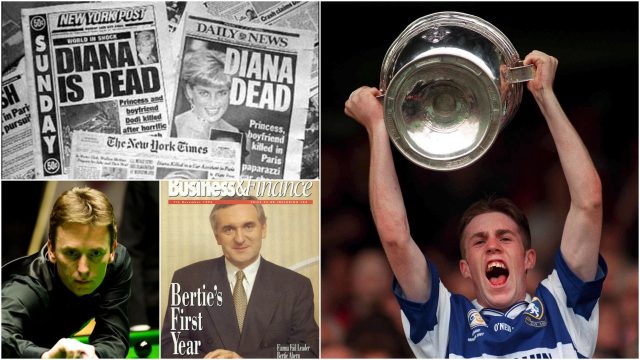 In the latest LaoisToday Down Memory Lane Podcast, presenter Steven Miller is joined by John Whelan and Brian Ramsbottom to back on the local, national and international events of 1997.

A General Election year, it was the year that saw Bertie Ahern become Taoiseach following a huge success at the polls when they won 77 seats.

That election spelled the end of The Rainbow Coalition and John Bruton’s term as Taoiseach while Dick Spring would later resign as leader of the Labour party.

It was also an explosive political year in Ireland with Michael Lowry resigning from Fine Gael and details of the £1.3 million given by businessman Ben Dunne to Charlie Haughey.

There was also a Presidential election in Ireland that year with Mary McAleese taking over from Mary Robinson having been supported by Fianna Fáil. A classic exchange between Bertie Ahern and his predecessor Albert Reynolds

The huge story that dominated the latter part of 1997 was the tragic death of Princess Diana in a car accident in Paris.

In club football there was an historic breakthrough for Stradbally, the O’Dempsey’s minors pulled off a shock county final win and Castletown continued to develop as a growing power of the club game.

It was also the year of the famous Lions rugby tour to South Africa, the year Ken Doherty won the World snooker title and the year the blockbuster Titanic film hit the cinemas.

And on TV, it was the end of some classic RTE shows like Live at 3, Blackboard Jungle and Sports Stadium.