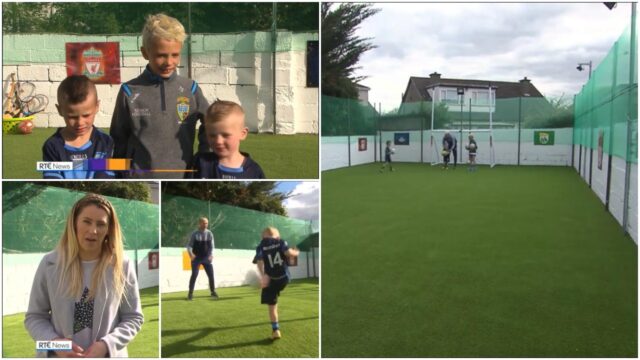 Floodlights, astroturf and badges of all your favourites teams hanging on the wall – wouldn’t you only love to be a child growing up in this house!

A former Laois footballer’s back garden is probably the best place to spend lockdown at the moment.

The segment, presented by Evanne Ni Chuilinn, was looking at how members of the St Jude’s GAA club, who Sheehan transferred to from Emo in 2016, are managing during the Coronavirus pandemic.

With GAA facilities set to be closed until July 20 at the earliest, most footballers and hurlers are having to make do with whatever space they have in their homes to keep their skills up.

But we’re fairly certain they’d all like to be living in the Sheehan’s as their back garden doesn’t have any grass – instead it has an astroturf surface.

A wall, with signs of badges including Liverpool, Laois, St Jude’s and Austin Stacks, encloses the pitch while a green mesh is above that to prevent any stray balls from flying into adjoining gardens.

And to top it all off – the garden even has floodlights to ensure that the matches can go on long into the night.

RTE reporter Ni Chuilinn described it as a ‘field of dreams’ and it most certainly is.

8-year-old Timmy, who recently dyed his hair alongside his dad to raise thousands of euro for the Do It For Dan campaign, explained how his dad made the pitch because they can’t go play in the usual way.

His brother Billy told how he is improving his soloing everyday while youngest brother Davie says he loves playing matches.

There was no sign of mam Marie Crowe, but as a former St Patrick’s Athletic footballer, the 2FM Game On presenter is most likely more than capable of mixing it with the lads.

Scroll to a minute in the clip below to check it out: