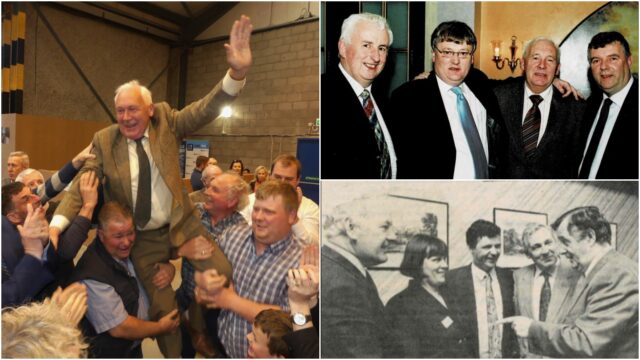 Seamus McDonald is Fianna Fáil’s longest-serving county councillor in Laois, the Rosenallis man first having been elected in 1985.

Now in his early 70s, Cllr McDonald said he briefly considered retiring aheas of last year’s Local Election – but he threw his hat in the ring again and returned with his highest ever number of first preference votes (1,089).

He is the latest local councillor to feature in our Life in Politics interview where he chats about his early memories, the politican he admires the most and the businessman he considers to be Laois’s greatest person of all time.

I had an interest in politics from a very young age. I can clearly remember cycling to local Fianna Fail Cumann meetings in the old hall in Rosenallis with my father.

My father, Jim McDonald had an active interest in politics and was a Fianna Fail stalwart.

During an election, I had always brought people without transport to vote on polling day.

I canvassed in my younger days with Paddy Lalor and Liam Hyland.

Charlie Haughey. He was a man who had vision and got things done. His involvement in setting up the IFSC (Irish Financial Services Centre) in Dublin and his work in trying to find a resolution to the troubles in the North is something that I admire.

The IFSC has since contributed billions to the economy. He ensured the vulnerable in society were looked after by providing free travel for pensioners and gave more access to medical cards.

I’ve always been a people person and particularly enjoy being out and about meeting the people.

You get to know many and that leads to life-long friendships. It gives me satisfaction when someone asks for my help to intervene with a problem that they are experiencing and to be able to solve it in how ever many steps it takes.

No problem is ever too big or small. The variety of situations you find yourself faced with on a weekly basis make the job interesting.

You are also nearly always busy with having to attend meetings, call to people’s homes, take and return phone calls, meet engineers to get jobs done and so on (although not at present with the restrictions.)

I wouldn’t have it any other way. I’m also delighted that I can have an input into the development of the county and highlight issues in my area that need urgent attention.

It always comes down to funding and the lack of it. It’s a major issue. That can include funding allocations to social housing, housing adaption grants for the elderly and those with disabilities and roads repair.

For example, a road in my area has not had repairs carried out to it in many years despite its appalling condition. I have been tirelessly seeking to have this road included in the roadworks programme over the years and only recently has it been given the go ahead.

It’s the slow progress and sometimes the difficulty to get things done that can be very frustrating.

The current shortage of housing has proved to be very difficult and crops up on a weekly basis.

Local government has weakened in Ireland with regard to spending and power.

Central government hold the levers of power and this waters down local government. Councillors and the council in general over the years have been lessoned more and more of functional powers.

For example we have lost the driving licences and higher education grants to name a few. I would like to see more power devolved to councillors from central government in the hope that it gives us the ability to carry out our roles more effectively.

You have to be committed to the role and be true to your word. You must work hard and set out to deliver on what you said you would do if elected.

Set out to get the job done, don’t beat around the bush. It’s a very time consuming role.

If you are considering entering politics then you need to build a profile locally and make yourself known in the community.

If you intend on knocking doors in years to come seeking a vote and you don’t have name and facial recognition from your work in the community etc, you may struggle, even if you are hard-working and genuine in your efforts.

Politics and elections has changed since I was first elected in 1985.

The era of social media has impacted how an election campaign is run. Candidates and representatives are now open to deeper scrutiny.

You would also want another job to fall back on should you lose your seat. No seat is safe during an election.

Would it have interested you to contest a General Election at any stage during your career?

Tom Treacy, a man who I greatly admire. Tom is a great businessman who has provided employment in the county for many decades.

Tom has done much work for the county of Laois. To name one of many, he has made a significant contribution towards tourism in Laois through the annual Gordan Bennett Classic Run which has drawn people from all over the world and has injected money into the local economy.

SEE ALSO – My Life in Politics: James Kelly on election memories, Tony Gregory and why local representatives should have more power