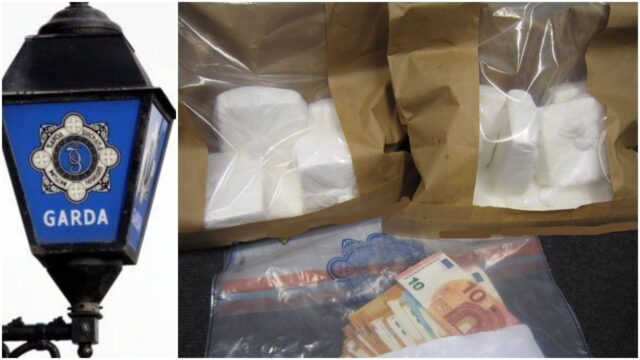 €280,000 worth of cocaine has been seized by gardai following searches in Portlaoise and Kildare this morning.

While officers also arrested two people in relation to their investigations.

The seizures were made as part of ongoing investigations into the sale and supple of controlled drugs in West Dublin and Kildare.

A Garda spokesperson said: “Gardaí from the DMR West Divisional Drug Unit, investigating the sale and supply of controlled drugs in West Dublin and Kildare, carried out a search of a car in Portlaoise and a house in the Kill area of Kildare this morning.

“At approximately 8:25am, a car was stopped on the M7 near Portlaoise.

“€35,000 worth of cocaine (pending analysis) was discovered and seized.

“The sole occupant of the car, a man aged in his late 40s, has been arrested and is currently detained at Birr Garda Station under Section 2 of the Drug Trafficking Act 1996.

“A follow on search was carried out a house in Kill, Kildare, where approximately 3.5kg of cocaine (pending analysis), valued at €245,000, was discovered in a cabin on the property.

“It is suspected that this cabin was being used as a location to mix and pack controlled drugs.

“A press, scales and other drugs paraphernalia, as well as €3,500 in cash and two vehicles were also seized.

“He was taken to Ronanstown Garda Station where he is currently detained under Section 2 of the Drug Trafficking Act 1996.