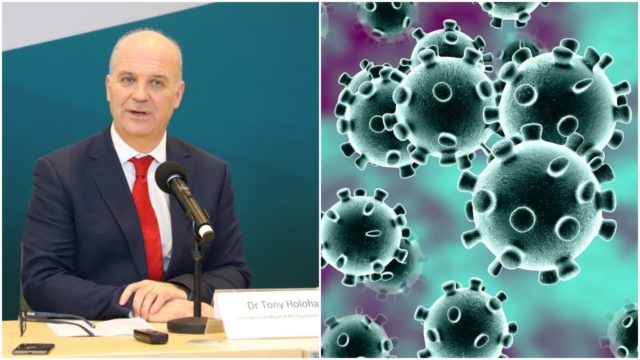 1,714 people have now died from Coronavirus in Ireland – an increase of two from yesterday.

While there has been a total of 13 new cases of Coronavirus have been diagnosed in Ireland today.

This is an increase on the total cases from yesterday and takes the overall total to 25,368.

Dr. Tony Holohan, Chief Medical Officer, Department of Health, said; “The importance of people exercising their own judgement and taking personal responsibility in protecting themselves and others cannot be overstated at this crucial point in the pandemic.

“Hand washing, physical distancing, cough/sneeze etiquette, face coverings and knowing the symptoms of COVID-19 – and what to immediately when experiencing symptoms – is how every individual can equip themselves to live safely as restrictions are eased.”

Dr Ronan Glynn, Deputy Chief Medical Officer, Department of Health, said; “Gov.ie/health and HSE.ie should continue to be the key sources of information on public health measures for COVID-19.

“Additionally, the new COVID-19 dashboard is a useful tool for anyone who wants to more about the disease in the community around them. Great progress has been made but the virus is still circulating and, as the World Health Organisation has said, the biggest threat now is complacency.”

Northern Ireland, the UK and globally

There was one new Coronavirus related death in Northern Ireland, leaving the total at 544.

There were also three new cases of Covid-19, bringing that total to 4,866.

New figures released by the Central Statistics Office shows that Laois is one of the best performing counties in Ireland in the fight against Coronavirus.

This is the sixth week in a row that Laois has recorded fewer than 10 new cases as the county continues to work together to suppress the virus. 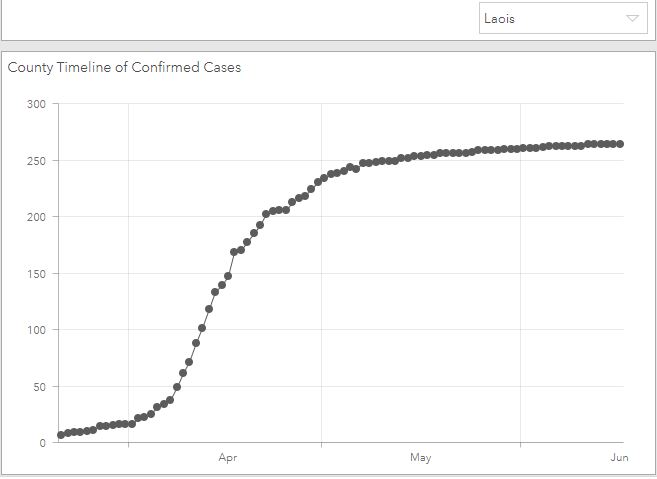 Aer Lingus is to cut up to 500 jobs at the airline due to the “catastrophic” Covid-19 collapse in aviation. The company has notified the Minister for Employment Affairs and Social Protection of the proposed collective redundancies.

They say: “The airline is currently operating less than 5% of normal schedule – and there is no certainty on restoration of services or future demand.

“The situation is exacerbated by uncertainty on how long the 14 day quarantine period and advisory against non-essential travel will continue.

“Ireland has failed to take steps that other European Member States have taken – they have progressively restored transport services and connectivity in response to a European Commission invitation to do so”.

New figures from the Central Statistics Office show the impact that Covid-19 pandemic restrictions had on people’s use of the internet in March, with more people reading news online and uploading self-created content.

The CSO said that 76% of internet users read or downloaded online news (including online news sites, newspapers or magazines) in March, up two percentage points on the corresponding figure for January.

Coronavirus present in Italy in December

The coronavirus was present in two large Italian cities in December, more than two months before the first case was detected, a national health institute study of waste water has found.

That suggests the virus appeared in Italy around the same time it was first reported in China.

Researchers discovered genetic traces of Sars-CoV-2 — as the virus is officially known — in samples of waste water collected in Milan and Turin at the end of last year, and Bologna in January, the ISS institute said in a statement seen by AFP on Friday.