If ever there was a success waiting to happen it was the St Joseph’s footballers in 1973.

Having originally started out as a juvenile club, they won the Laois junior title in 1967, the intermediate in 1969 and were only beaten by a point by Portlaoise in the 1970 senior final in their first year in the grade.

It took them three more years to get back to the final – but there was to be no denying them in 1973.

After comfortable wins over Annanough and St Fintan’s in the early rounds, they then got the better of 1971 finalists Graiguecullen in the semi-final. Emo, the champions of the previous year, were dumped out in the first round by Arles, who in turn lost to Graigue.

On the other side of the draw, Timahoe shocked Portlaoise in the opening round, then beat neighbours Stradbally before just doing enough to beat Courtwood in the semi-final.

St Joseph’s entered the final as favourites but Timahoe were far from no hopers and were seeking to add to the title they had won four years earlier in 1969.

In the final, St Joseph’s never trailed and after leading 0-5 to 0-3 at the break, they struck for the crucial goal early in the second half.

The Nationalist newspaper described the goal as a “delightful effort” from Derek Brennan – one of four Brennan brothers on the Joseph’s team – after a passing movement involving Tommy Garvan and Tony O’Brien.

At one stage Joseph’s were six points up but Timahoe clawed their way back into contention with two points from Tom Joe Bradley and one from Bobby Miller.

But they didn’t have enough as The Nationalist noted how “football history was made in O’Moore Park”. “It was a fitting end to a remarkable yet short era in Laois football.

“Victory meant that the lads from Ballyadams have now taken every title possible in Laois football.

“Originating as a juvenile team … the Saints swept the decks year after year in juvenile ranks … and as they advanced from minor to junior to intermediate and eventually to senior grade, many stamped them as potential champions”.

The Nationalist reporter even went as far as to say they were “as fine a bunch of ball players as Laois has ever produced”.

“Men like Kieran Brennan, Tommy Garvan and Dessie Brennan stood out above all others,” read the report.”

Goalkeeper Billy Condron was described as “unbeatable” as “time and time again he saved brilliantly – low shots or high balls were all dealt with capably by the bang in form Joseph’s keeper”.

Dessie would go on to give a lifetime of service to club and county – and spent a couple of spells as St Joseph’s manager, including a four-year spell until last year. 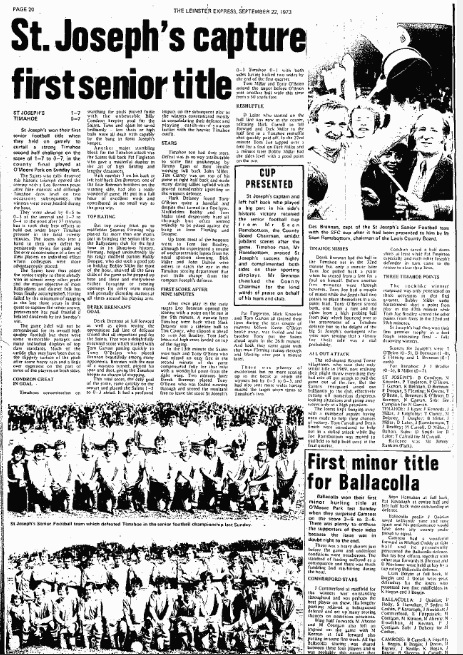 For Timahoe, goalkeeper Jimmy Egan was singled out for praise in The Leinster Express as was “terrrific full-back John Miller”, Tim Clancy who “was on top of his game at right half back” and “up front most of the honours went to Tom Joe Bradley. Dick Miller (who would go on to be Laois GAA chairman0 and John Dalton were others to catch the eye”.

Timahoe would contest the final again against St Joseph’s in 1978 but their success in 1969 remains their only senior triumph.