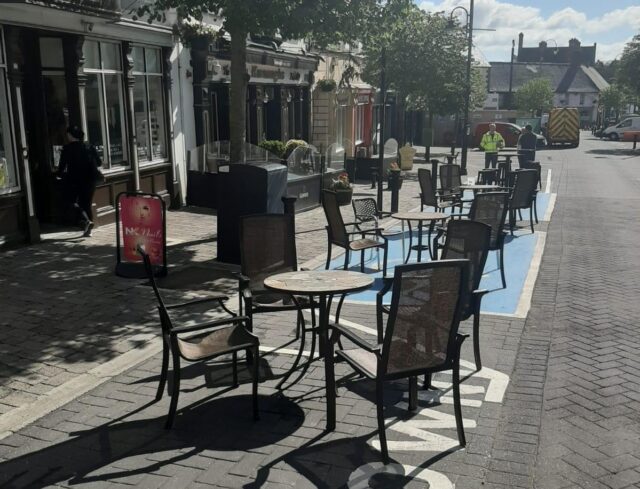 It’s not very often that all seven elected Laois County Councillors for the Portlaoise area (or any area for that matter) will agree on something.

But they have come together to formally ask Laois County Council to extend the pedestrianisation of Main Street in the county town.

A short section of Main Street (from Fortune’s Corner at Railway Street to the old Shaw’s site) has been pedestrianised temporarily for July and August from 11am to 5.30pm every day.

The decision to pedestrianise that section of Main Street was made last month in a bid to support businesses in light of the Covid-19 restrictions.

But it was hotly debated at the recent Portlaoise Municipal District meeting.

Among the points raised by the elected representatives was that all businesses on Main Street should be treated the same.

Director of Services for Laois County Council Simon Walton said that removing traffic from the entire street would create knock-on effects – like also forcing the pedestrianisation of Church Street, Bull Lane and Railway Street and adding to traffic on other areas around town.

However, the councillors have written to Laois County Council asking “that the area to be pedestrianised be extended from the top of Upper Main Street to include the Top Square and continue to Bridge Street.”

They are also asking that the time of the pedestrianisation be changed that traffic is closed offat 5.30pm on Friday evening until Saturday at 8am – and then again at 11am on Saturday until 8am on Monday morning (or 8am on Tuesday morning on the August Bank Holiday weekend).

Simon Walton did say at that Portlaoise Municipal District that he would look at changing it – but that will take at least a couple of weeks as they are required by law to publish notice of their intention to close.