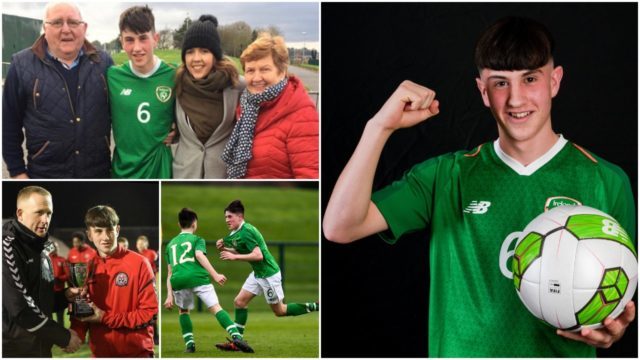 For the second successive year, a Laois teenager has been nominated for a very prestigious award.

Portlaoise native Colin Conroy has been nominated for the U-16 Republic of Ireland International Player of the Year award.

Last year, he was up for the U-15 gong which was won by Anselmo Garcia-McNulty who plays for Wolfsburg in Germany.

Conroy has been nominated alongside two of his international colleagues – Ben McCormack and Gavin O’Brien.

If Conroy is victorious, he will join a prestigious list of previous winners which include Troy Parrott (Spurs), Jason Knight (Derby), Jayson Molumby (Brighton) and Conor Masterson (QPR).

The nomination is justified recognition for the Bohemians/St Kevin’s Boys midfielder who has risen through the ranks at an incredible rate.

He represented the Midlands at the Kennedy Cup as an U-13 when playing for Portlaoise AFC – despite the prestigious competition being for U-14s.

He transferred to St Kevin’s Boys in Dublin a year later where he has played for the last four seasons following their amalgamation with Bohemians to enter the League of Ireland structure.

Conroy, who is from Sheffield Cross outside Portlaoise and the son of Martin Conroy and Caroline Allen, was called up to the Ireland U-15 squad in 2017 and subsequently captained them in a friendly with Poland.

The Portlaoise native subsequently played twice against Cyrprus for the U-15s before graduating to the U-16 squad at the end of last year.

Last year, he represented the Irish U-16s at a UEFA tournament in Israel and concluded the year by helping the U-17s reach the Elite Qualifying Phase for the Euros.

The Euros should have been on this summer but Covid-19 put a halt to all of that.

Due to the outbreak of COVID-19, the Awards ceremony was originally postponed from earlier this year and will not take place due to social distancing protocols remaining in place.

This is the 30th year of the Awards and celebrates the performances of players in the previous international season.

The ‘Hall of Fame’ and ‘Special Merit’ recipients will be announced next week along with the winners of each category.