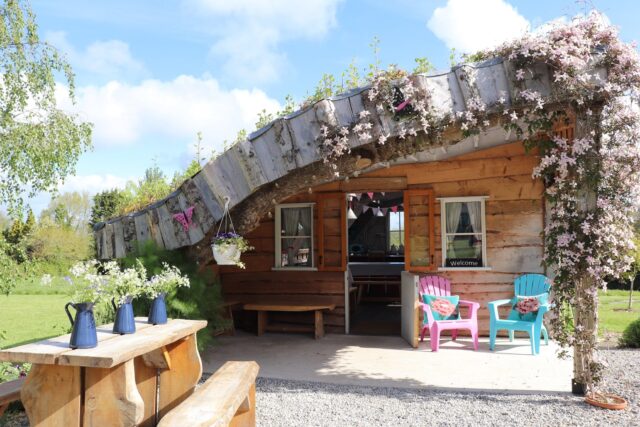 Every cloud has a silver lining.

The shock announcement last week that Laois was to be placed in a partial lockdown for two weeks along with Kildare and Offaly meant that many people’s plans were thrown into disarray.

Anyone who had a holiday booked outside the county couldn’t go while sports fixtures and occasions like confirmations had to be cancelled.

For many Laois businesses, the announcement left them in an awful position, having to cancel bookings and figure out what they were going to do with stock.

Ballyroan-based business Glamping under the Stars were no different. “It was a heartbreaking time,” said Kyra Fingleton who owns the business with her husband Barry.

They found themselves having to cancel & refund bookings, having invested heavily in making the site super safe and compliant with social distancing requirements.

However, as news of the restrictions sunk in, the phone started ringing, with local Laois people begging to book into the facility, which offers a mix of bell tents, wood lodges and a shepherd’s hut – each with private bathroom and cooking facilities.

“Local people who had their bags packed for a break in Galway, Kerry and Cork now couldn’t go,” said Kyra.

“Their families were disappointed, and they wanted to book in with us – if only for a couple of nights – to treat themselves and soften the blow. I must have had at least 50 enquiries by Saturday lunchtime! The demand and support from local people was phenomenal.”

Many local folk had seen Glamping Under The Stars on social media, but never booked because it’s right on the doorstep.  Suddenly, it made sense for Laois people to holiday in Laois.

And a completely socially distanced glamping adventure with a private campfire for toasting marshmallows with the kids was very appealing.

Initially for the Fingletons, it was difficult to get clarity on whether or not the glampsite was permitted to reopen.

With lockdown announced on a Friday evening, Failte Ireland offices were closed, and very little detail was provided to businesses in the three counties.

By Tuesday evening, during a conversation with a representative of Failte Ireland, the Fingletons were told that, under the terms of the localised lockdown, re-opening the glampsite to local people was ‘at the discretion of the business’, rather than a complete no no.

Glamping Under The Stars announced it’s reopening just for Laois people that night, and received the most incredible support, both from local people & businesses, and from regular guests.  The lockdown period was fully booked with locals within 24 hours.

“The phones were ringing constantly and the Facebook post we shared went absolutely mad!  It reached over 80,000 people! For a small business like ours, it was pretty overwhelming, but so positive and uplifting after the shock of having to shutdown just a few weeks after reopening.”

Kyra hopes to reopen Glamping Under The Stars to guests across Ireland at the end of the two week lockdown period. Despite initial fears, covid cases remain low in County Laois, and are mainly limited to meat factory clusters.

“We have been absolutely stunned by local support. And we’ve had loads of comments from people outside the county (especially Kildare & Offaly!) wishing they could join us. We look forward to welcoming everyone else back to lovely Laois as soon as it is possible”, she says.

SEE ALSO – #LoveLaois: ‘Glamping under the Stars’ – an experience to be recommended