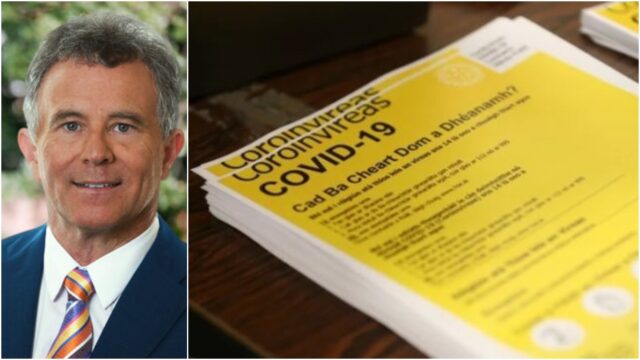 Getting people back to work “is ten times more important” than worrying how the country repays the debt brought on to fund the extensive Coronavirus measures, according to Laois Fianna Fáil TD and Junior Minister Seán Fleming.

“Public health and safety is the first priority,” he said in a recent LaoisToday Talking Politics Podcast. “The second priority is getting people back to work.

“If that happens we’ll deal with the debt in due course after that.”

“What would be my priority – jobs, jobs, jobs,” he said in the same interview in relation to his new role as a Junior Minister.

“I think we’re seeing some new job announcements in Laois but I would like to see more of that.

“We had IDA company Greenfield Global, employing local people – would like to see others following and Irish businesses locating in Portlaoise too.

“Glanbia are scheduled to open premises very soon … that all has to be good and it will improve the views of outsiders on Laois as place for industry and employment.”

Asked how the country will repay the massive borrowings to fund the various measures put in place, he said that is not the immediate focus.

“I’ll put it this way. I’m more interested in the economy recovering and people getting back to work.

“The payment of what we had to borrow this year and into next year will have to be repaid but that is way down the line. Interest rates are almost zero.

“Getting people back to work is ten times more important than worrying how we pay for it.

“The amount we’re borrowing for all of this is probably similar to what we borrowed during the banking crisis. And we did get back on our feet and people in record numbers in employment.

“If you have over two million people in work (the country will be) generating enough income to pay back any debts that have to be paid.”