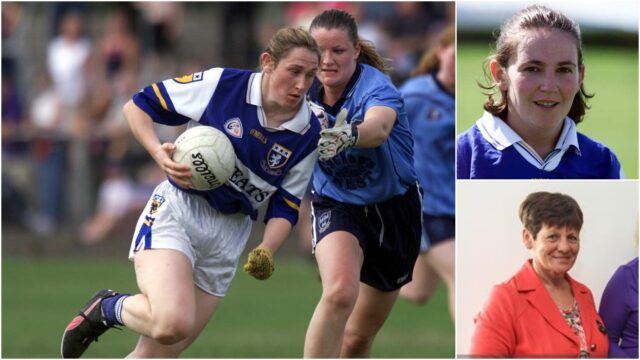 Three Laois ladies footballers are included in the Irish Independent’s list of top 50 players, which is published in today’s newspaper and online.

Sue Ramsbottom, the late Lulu Carroll and Connie Conway are all listed with Ramsbottom selected as the fourth best player of all time, behind Mayo’s Cora Staunton, Kerry’s Mary Jo Curran and Waterford’s Aine Wall. Only the top ten are listed in order, with the remainder in alphabetical order.

The list is compiled by journalist Cliona Foley who has covered the ladies game for a long number of years.

Cork lead the way with eight representatives while Kerry, who dominated the game throughout the 1980s, have seven, as do Dublin and Mayo.

Waterford have five players selected with Laois next on three followed by Galway, Monaghan and Tyrone on two each. Six further counties have one representative apiece.

“With over 56,000 now flocking to watch its annual climax it is hard, sometimes, to believe that ladies Gaelic football, founded as an organised sport in 1974, is not yet 50 years old,” writes Abbeyleix native Foley in the piece.

“It’s equally unbelievable that its first great team – Kerry – won some of their nine in-a-row in venues like Nenagh, Kilsheelan, Timahoe and Páirc Uí Chaoimh before the women’s finals first got into Croke Park in 1986.

“Media coverage of the Kingdom’s magnificent run from 1982-90 is so scant that they have never really got enough recognition.”

“Given that regular television coverage only started in 2001 thanks to TG4, it will have recency bias but, at least, it puts these 50 greats on the record and, we hope, stimulates further debate.”

The Laois players selected were profiled as follows:

Won an All-Star in goals in 1991 but best known as a midfielder or half-forward and left an indelible mark on her county. Her six lost finals included her famous lobbed goal to earn a replay with Monaghan in 1996. Was still starring in a club final in 2000 and sadly died in 2007, aged just 35.

Laois have defensive contenders like Angela and Mary Casey but Conway was their most influential. An out-and-out no-frills full-back while they reached seven senior finals from 1985. Sadly lost them all and was gone by the time they won in 2001 but finished with five All-Stars.

Texaco Player of the Year and seven-time All-Star even while Laois lost six senior finals. So powerful and skilful that she scored in an All-Ireland club final with the Heath when she was 12 and played in a senior final (1988) and won an All-Star when she was just 14.

SEE ALSO – Sporting Memories: Sue Ramsbottom on All Ireland glory after all the heartache, early days with The Heath and playing rugby for Ireland