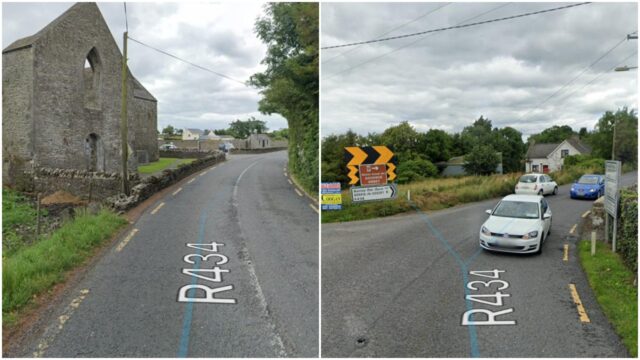 Calls for Laois County Council to address safety concerns at the ‘worst bend in Laois’ have been made.

Fine Gael Cllr Conor Bergin raised the issue of ‘serious speeding on the R434 at Aghaboe, Clough, at a meeting of the Borris-In-Ossory/Mountmellick Municipal District.

According to Cllr Bergin, the bend at this location is the ‘worst bend in Laois’ and he called for traffic calming measures to be implemented.

He said: This is safely the worst bend in Laois and it is on a major road too – it is a real black spot.”

Agreeing, Cllr James Kelly said: “The section of the road is so narrow that if two trucks meet on it, they are left with no option but to stop. And that is very dangerous.”

“It is all down to speed,” said Cllr Ollie Clooney. He added: “It is a serious accident waiting to happen if action is not taken.”

Cllr John King said: “Safety signs and other measures would help but if we could take Harvey’s House and purchase it, it would solve a lot of problems too.”

In reply, Farhan Nasiem, engineer, said: “Road design will arrange a meeting with the elected member to identify exact location and issue.