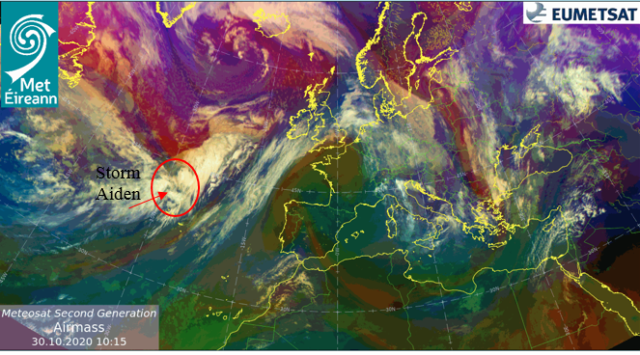 Met Eireann has officially named the first storm of the season as Aiden is to strike the country over the Halloween weekend.

An Orange Warning for wind has been issued for five coastal counties while the rest of the country, including Laois, is on a Yellow warning.

The worst of the weather is expected between 1am and 3pm on Saturday October 31.

Met Eireann say: “On Saturday morning strong southerly winds veering southwesterly associated with Storm Aiden will reach mean speeds of 65 to 80km/h, with severe and damaging gusts of 100 to 130km/h.

“A Status Orange wind warning will be in place for Donegal, Galway, Mayo, Sligo and Clare.

“Very unsettled weather will occur over the Halloween weekend as a series of vigorous Atlantic weather systems pass close to Ireland.

“Spells of heavy rain will lead to surface and river flooding.

“Very windy/stormy at times with some severe and damaging gusts possible.

“Some coastal flooding possible also due to the combination of low pressure, high tides and onshore winds.”

He said: “A developing storm looks set to bring some potentially damaging winds to parts of the south and west coast through tomorrow morning, with winds in coastal areas reaching up to 130km/h, while gusts further inland will reach between 100-110km/h across inland Munster, Southeast Leinster and Connacht.

“There is also a risk of some localised flooding as a result of further heavy falls of rain, with again the highest risk occurring across the southwest and west.

“Coastal flooding may also become a significant issue in the south of the country as winds in excess of 100km/h will generate a high sea swell that’s expected to coincide with high tides.

“Cork City and Bantry are again likely to experience some flooding, though it’s still uncertain if it will reach the levels experienced recently.”