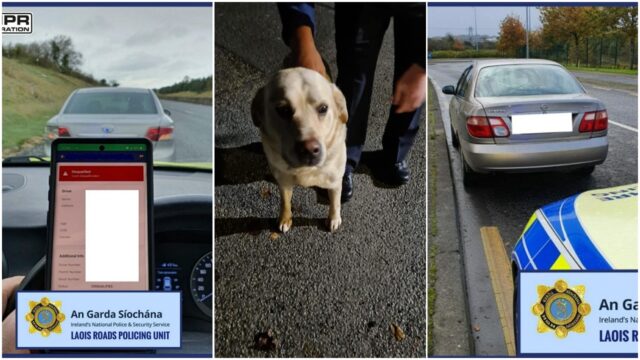 Gardai in Laois have been very busy in recent days – dealing with a range of motor offences and trying to locate the owners of a lost dog.

On Tuesday, Gardai discovered a driver speeding on the M7 who subsequently tested positive for drugs.

Gardai said: “Laois Roads Policing Unit on duty this morning detected a car travelling at 170kph on the M7.

“The driver failed the roadside drug test and was arrested. The driver has been charged to appear before Portlaoise District Court.

“Weed and Speed is a poor combination.”

Also on Tuesday, Gardai recovered a lost dog and are seeking information on its owners.

They said: “This dog was found at the Post Office Mail Centre in Portlaoise. Currently being fed and watered at the Station.

“Please contact Portlaoise Garda Station on 0578674100. Proof of ownership will be required.

On Monday, Gardai seized a vehicle on the M8 near Ballacolla.

They said: “Laois Roads Policing Unit on patrol on Monday, using ANPR technology, stopped a vehicle on the M8 near Ballacolla.

“A check on the Garda Mobility App discovered the driver to be Disqualified. Driver arrested and charged. Vehicle seized.”

While on Sunday morning, Gardai discovered a disqualified driver while on patrol.

They said: “Laois Roads Policing Unit on patrol on Sunday morning arrested the driver of this vehicle after they were discovered to be driving while disqualified.