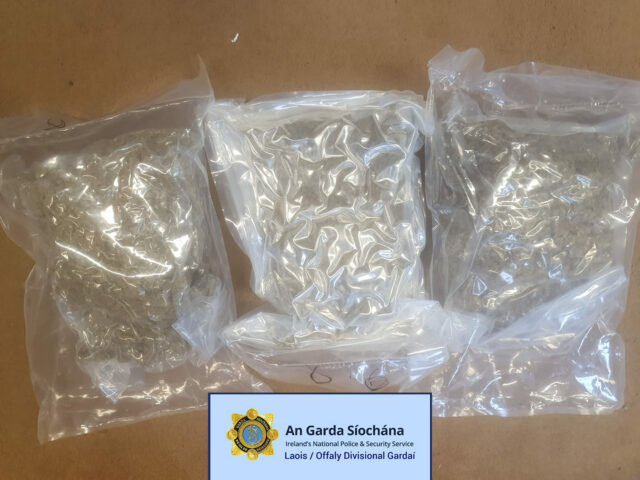 Laois Gardai seized €60,000 in cannabis and made one arrest following recent searches in Portarlington.

Gardai say the searches were carried out as part of an ongoing investigation into drug dealing in the area.

They said: “Gardaí from the Laois Divisional Drugs Unit seized approximately €60000 of cannabis during a search in Portarlington recently.

“The search was conducted as part of an ongoing investigation targeting drug dealing in our Division. One person arrested.”

Meanwhile, yesterday was another busy one on the roads are Gardai made two arrests and seized two vehicles in three separate incidents.

They say: “Last night, Laois Roads Policing Unit arrested a Learner Permit holder for Dangerous Driving on the M8 after being detected travelling over 200kph.

“This driver has been driving on a Learner Permit for over 20 years.

“The vehicle was seized under the Clancy amendment with the driver Charged to appear before Portlaoise District Court.

“Separately another Learner Permit holder who has only been on the road for 3 months was detected speeding at 164kph on the M7.

“Their vehicle was also seized under the Clancy amendment and Fixed Charge Notice issued to the driver.

“And in Portlaoise Town yet another Disqualified Driver was arrested and charged before the courts.”

SEE ALSO – Laois hurling captain among 3,000 at first ever virtual IT Carlow graduation