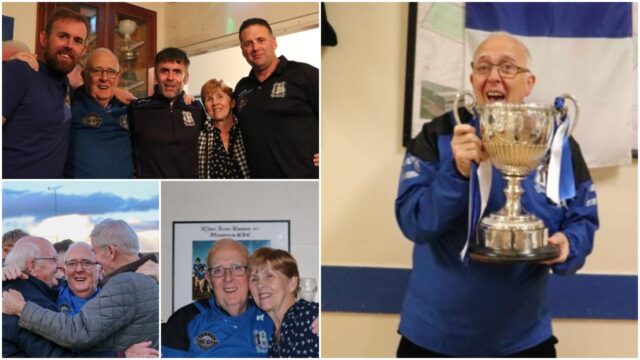 A wonderful tribute has been paid following the sad passing of Monasterevin GAA’s chairman earlier this month.

Matt Lonergan, chairman of the club which is located on the Laois-Kildare border, passed away on November 6.

His club paid a beautiful tribute to Mr Lonergan who served at almost every single level within the club.

They said: “Matt has been a lifelong member of Monasterevan GFC and over the course of that time he has held almost every position possible within the club.

“He first became a committee member while still a teenager and his capacity for leadership, organisation, communication and administration set him apart from an early age and made him an invaluable asset to the club.

“Over the decades since then Matt served in numerous positions on club committees and was the founder of Monasterevan Og in 1988 to cater for the youth of the parish.

“During Matt’s current chairmanship over the past 3 years he worked tirelessly to ensure the successful completion of significant developments at the club including match standard floodlighting to the senior field, new ballstops at the Woodview end and an upgrade to the Cowpasture Entrance Lane.”

Matt’s family have been heavily involved in the club and have enjoyed multiple successes over the years.

The club continued: “Indeed the Lonergan family have had a long association with the club. Matt’s brother Christy (RIP) won IFC, SFC and 2 Leader Cup medals with the club during the golden 70’s era. His brother Joe also played first team football with the club while Dick and Fr Pat (both RIP ) played minor with the club.

“His son Brian played senior with the club and last year managed our senior team to win the IFC.

“His son Niall also played with the club and is a current club committee member while Barry has involvement with Og.”

Outside of GAA, Matt was heavily involved in the local community.

The club said: “Outside of the club Matt was a stalwart community worker, proud of his Monasterevan roots, and involved with several organisations in the town over the years including schools, the CYMS and the ‘Br Bradshaw Charity (for Sierra Leone)’.

“Matt also was a tireless worker for the parish in Monasterevan including visiting the sick and housebound as a Eucharistic Minister.

“His family have lost a wonderful husband, father, grandfather, brother and uncle. To Brigid, Brian, Niall, and Barry, to Joe and Sr Mary Anna, to his grandchildren and to his extended family we express our heartfelt sympathy.

“His neighbours in Old Grange Avenue and the people of the town and parish have lost a wonderful servant whose loyalty never waivered. And our club has lost an absolute gem, a true blue to the end, may he rest in peace.”

May Matt Rest in Peace.