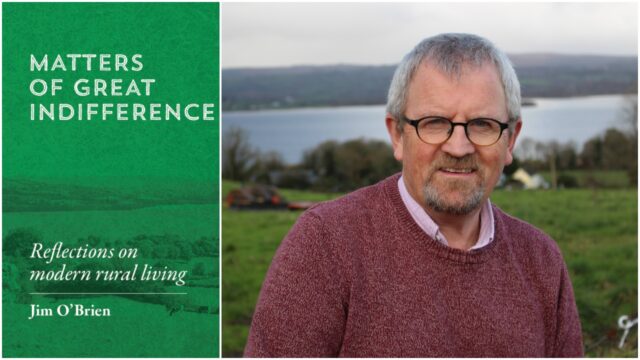 Journalist, columnist and author Jim O’Brien is no stranger to Laois having lived in Rosenallis for 13 years between 1999 and 2012.

He was well-known in the county for his various community involvements and his contributions to local print and broadcast media.

His wife, Louise Donlon was the founding manager of the Dunamaise Arts Centre in Portlaoise.

In a new book entitled, ‘Matters of Great Indifference, reflections on modern rural living’, Jim has compiled a selection of his weekly columns published in the Farming Independent from 2017 to the present.

His work as farming property correspondent with the Farming Independent (published every Tuesday with the Irish Independent) sees him travel the country; walking land, meeting locals, chatting with rural auctioneers, and tasting the delights at village coffee shops.

The job makes him uniquely placed to keep a finger on the pulse of rural Ireland.

Speaking about the book, Jim said: “Inspiration for the column comes from what I see around me and what I encounter.

“Anything from an old village shop-front, a word from a neighbour, a line from a book, the smell of a tractor engine, the bark of a dog or the hum of a milking machine can spark a train of thought that eventually hammers itself into about 800 words.”

Jim is also not afraid to delve into the personal and comes into his own when writing about the joys, delights and sorrows experienced at the milestones that mark a life.

Matters of Great Indifference can be purchased in O’Gorman’s newsagents, Mountmellick or online from his website and Amazon in paperback or as an eBook.