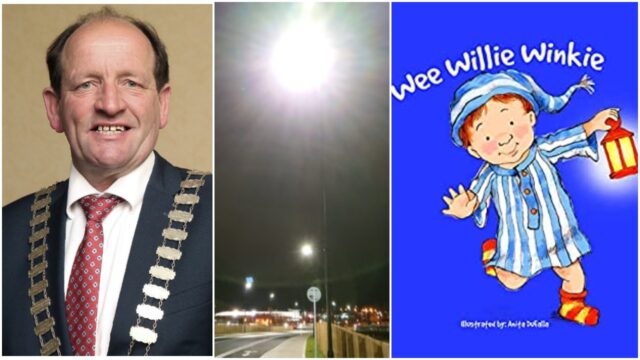 A Laois County Councillor has said he is being ‘scalded’ on the phone on a daily basis over the installation of new LED lights in Portlaoise.

Cllr Willie Aird says he has been left running around like ‘Wee Willie Winkie’ and reckons there would be much light coming from the lamp that the nursery rhyme character carries than from the bulbs the council are currently erecting.

Cllr Aird raised the issue at the Portlaoise Municipal District last month and on Monday in the Dunmaise Arts Centre, he brought it up in from of the full Council.

According to Council engineer Farhan Nasiem, 40% of the 2,563 public lights in Portlaoise will be irreplaceable in the next 12 months as the fittings for them are no longer being made.

According to Mr Nasiem, these LED lights take a targeted approach to fully illuminate the street and footpath.

But speaking yesterday, Cllr Aird and Cathaoirleach Catherine Fitzgerald said they would expect most of this saving to be wiped up in having to install additional lights.

Cllr Aird said: “I am being absolutely scalded on the phone every day over lights and I’m running around like Wee Willie Winkie.

“My phone rings every day over these new LED lights and we were in Fairgreen the other night and parts of it are just pitch dark.

“We can’t have people living in fear of the dark in areas where they once had light.”

Cllr Fitzgerald, agreeing with Cllr Aird, told how she had fallen over a bicycle that was parked on a path in Fairgreen because it was so dark that she simply did not see it.

She said: “The amount of new lights that will need to be erected in Fairgreen is incredible – we estimated that at least 40 more will be needed.

“I actually fell over a bicycle that was parked on a footpath in the estate because it was so dark that I couldn’t see it.

“It is pitch dark in places and it was honestly one of the worst things I have ever witnessed in my time as a public representative.”

Cllr Ollie Clooney, who warned of these problems back in March when the replacement began in Durrow, said that the issue of lack of light is a serious one and that people were angry.

Director of Services Simon Walton once again acknowledged that some estates in Portlaoise were not getting the same quality of light from these new bulbs as from the old ones.

He said that in some instances, trees would have to be pruned or else extra lights would be erected.

But following a request from Catherine Fitzgerald he agreed to meet with a delegation of Councillors to discuss the ongoing problems that these lights are causing and look at a cost-benefit analysis.