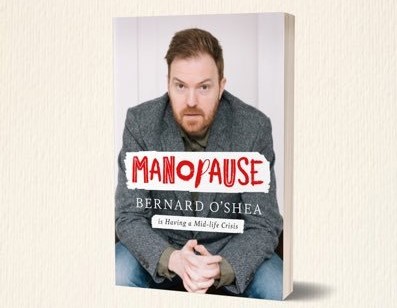 Having just turned 40, Laois comedian Bernard O’Shea found himself hurtling towards a mid-life crisis. The following is an extract from his new book Manopause

For my birthday, my wife Lorna gave me the greatest present I’ve ever received: five free days to do whatever I wanted. She was taking the kids to her parents down the country and I could have the house to myself. For the first time in six years, I had no responsibilities.

I was totally floored by Lorna’s present. At first I was all ‘Oh, I’m going to miss you and the kids so much’ and ‘I want to celebrate with you guys’ but inside I was doing backflips.

I met Laura when I was 28 and she was 23. We were married two years later. Within the blink of an eye we had three kids under six – Olivia, Tadhg and Seán – and a mortgage.

She has built up catchphrases to describe me over the last 10 years and her most frequent one is ‘You just want to live in a one-bed apartment in town and play your guitar and watch football’. I couldn’t deny it.

Living with small kids is so much harder than I’d thought. They don’t sleep, they demand things constantly and they put yogurt EVERYWHERE. I love them to bits but a five-day break was possibly the most amazing thing that had ever happened to me. I would be on my own for the first time in seven years.

As the car pulled out of the driveway, the kids were ecstatically waving goodbye.

They knew a Mayan-style celebration of chocolate would greet them in Granny and Grandad’s, so there were not in the least bit upset to say goodby to their father. Lorna shouted, ‘enjoy the last few days of your 30s, bachelor boy’.

Their father has grown considerably in size since he was a bachelor. Just ten years ago, before I met their mother, I was twelve-and-a-half stone. As I stood in the driveway weighing in at sixteen stone.

Ten years ago, I wouldn’t have hobbled back towards the front door: back then I had two working hips and two good knees. Now, I have legs that go in one direction and a kneecap that dislocates so often it’s rented an apartment halfway down my shin.

Ten years ago my only worries were making sure I didn’t book stand-up gigs on the same weekends as the football matches I wanted to watch on TV, or fretting about getting my car cleaned – now, the car is a dumping ground for chicken nuggets and melted chocolate, mixed with toddler tears.

But, most significantly, ten years ago I had energy. I exercised. I would meet up with friends for lunch. I would do a hundred stand-up gigs a year, probably one hundred sit ups a week.

I would take the stairs in shopping centres and socialise – a long. I would go out and stay out until the morning time. Now, I do all that except with a four-year-old alongside me demanding ‘psgetti bolognese’.

Where had all my time gone? I never would’ve believed ten years ago that the best present anyone could give me is time.

I closed the front door and sat down on the destroyed couch. It would be the first time ever that I’d sleep in the house on my own. Usually, Tadhg wakes me at 2am every night. I get him water, tell him a quick story or say ‘no’ to one of his bizarre demands. They range from ‘get me a ham wrap’ to ‘I want bread and an orange,’ to my personal favourite: ‘Bring up all the monkeys from downstairs.’

A third person has entered our lives in the last year too – Seán. He has been using the corners of the leather panels on the couch as teething toys. He has devoured several of those chewy giraffes and is moving onto cowhides.

At four, Tadhg is now a big brother and Olivia, like most girls, is smart and at any time can position her brothers on the chess board of life at will.

Now, the dynamics of family life were in full swing, but I needed a break. I’d forgotten what it was like to eat a bowl of cereal without someone wanting to put their hand in it.

I’d forgotten how pleasurable it is to spend an entire day on the couch without finding a beheaded teething giraffe buried under a cushion. I’d forgotten what it was like to have a day where I did nothing. The quiet. That’s the first thing that hits you … the quiet. I love the kids, but I also love the quiet.

I could even hear a lawnmower in the distance.

I could have a cup of tea without it getting cold. For the past five years every time I’ve made a cup of tea, I’ve ended up throwing it out because it’s gone cold.

The TV blared into the silence. The sound was at 47, but I could still heard it when I turned it down to 10. That’s how loud our house is with three kids under six.

I remember going to Grands Prix years ago and they would hand out earplugs so your eardrums wouldn’t get damaged. They should hand them out to parents when they have their first child.

It’s the noise kids make that nobody prepares you for.

I decided that whatever I was going to do for the next five days, it would not involve being a ‘father’. I was taking a break off from being ‘Daddy’. I was still a young, vibrant, creative man with energy and vitality.

I spent the next two hours sitting on the couch watching Sky Sports News. Eventually, after four mugs of hot tea and an entire packet of tea cakes, I mustered up the energy to send out a text to my friends.

It was one I’d sent often in my 20s and 30s and then hadn’t sent in ten years. It was a simple message, one that I got almost giddy with excitement sending:

‘Anyone up for a few pints?’