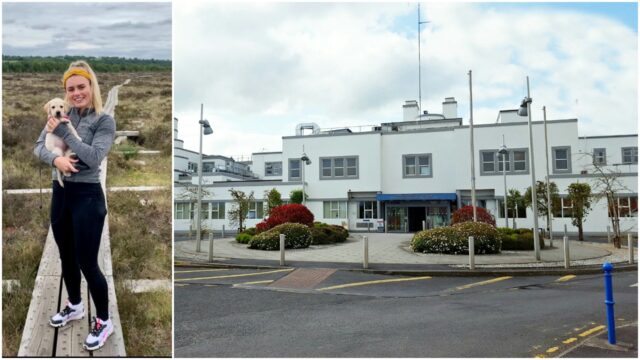 A Laois woman is calling on people to ‘get moving’ as her Instagram-based fundraiser for student nurses in Portlaoise Hospital took off over the weekend.

Lynda Keyes, from Camross, has set up a GoFundMe Page and it has already raised more than €2,000.

The 22-year-old, who has a degree from IT Carlow and is currently studying a masters in Marketing, Consumption, and Society in University of Limerick, explained how a number of experiences over Christmas inspired her to try to help the nurses who are battling Covid-19 on the frontline – while also studying for their degrees.

Lynda explained: “I was scrolling through my Instagram during the Christmas and I saw a lot of student nurses sharing their stories about how they’re not getting paid for working during the pandemic and basically being treated like slaves.

“Being honest, I actually didn’t know this at all. I thought that they just got underpaid which I didn’t think was too bad considering they are students and don’t have the full qualifications yet.

“So I did a bit of research and found out that student nurses (1st, 2nd and 3rd Year) are working up to 39 hours a week unpaid.

“They’re not entitled to sick days – they’re supposed to be learning but really what’s happening is that they are doing jobs they are not even qualified to be doing, they are multitasking like animals.

“The 4th year students get paid as it’s an internship but they get horrendously underpaid.”

Although not in the healthcare profession herself, Lynda is close to people who are – and they further educated her and what is going on at the moment.

Lynda said: “Over Christmas, I was with my sister, she’s a full time care assistant, and I noticed how anxious she was around people. She wouldn’t take off her mask, wouldn’t get into the same car as us.

“It really concerned me, and don’t get me wrong, I know we need to keep our distance and be responsible, but the stress it had on my sister was scary.

“My boyfriend’s Mam works in a nursing home. I asked her about it and she said she’s the exact same. It made me feel for all the HSE workers out there to be witnessing such heart breaking scenes.

“For student nurses to be doing this and NOT getting paid was just disgusting and disgraceful. The Government should really be ashamed of themselves.”

And so Lynda started up her GoFundMe Page – and also started her ‘get moving’ campaign on her own Instagram account.

She said: “I’m not the most confident girl but I just really felt like something had to be said from a student that’s not a nurse as there are already loads of campaigns happening, being ran by student nurses themselves.

“I just felt like they needed help, and come on, how can they run a campaign and be working those hours at the same time.

“I’m at home doing nothing, I can at least use the spare time to do something useful.

“So my campaign consisted of getting people to move for our student nurses, post it on their Instagram story, nominate a few friends, get the hashtag #PayStudentNursesandMidwifes out there and then donate to my GoFundMe if they were able.

“The GoFundMe is only for our Portlaoise Hospital student nurses as it would be impossible to give every nurse in Ireland a gift.

“The main aim of the campaign is to create as much awareness as possible for our student nurses.

“I wanted them to see the posts from the public, feel appreciated and make them feel motivated for their tough schedule ahead of them.

“If I was in their boots, I’d be dropped out by now and we don’t want our future healthcare workers dropping out, we need to encourage them to stay going and help us all, as that’s what they do.

“They help you, me, your mam, your dad, your friend. So, why can’t we help them out for once.

“People can get involved by simply getting up and completing any sort of movement. It can be a puck around, a walk, play with your dogs. Any movement. Not just that dreaded 5k run.

“Then post it on your Instagram story, donate (if possible) nominate a few friends, use the hashtag #PayYourStudentNursesandMidwifes and tag my Instagram page so people can find the link for the GoFundMe.

“It’s really that simple. People might not think this doing a lot, but it is.

“Everyone loves attention, think how amazing the student nurses will feel when they see that all of us are behind them and appreciate them.”

As stated already, the response to Lynda’s campaign has been amazing with more than €2,000 raised – something the Camross native is thrilled about.

“My phone is going 90, I’m probably going to get more blocks on Instagram than followers as I’m posting that much. But that’s what you got to do when you’re trying to create awareness, stay consistent and don’t mind if your annoying people, they’ll get over it.

“I would like to thank absolutely everyone that participated and donated so far, I really do appreciate it. All my friends and family have been amazing, I am super grateful for that.

“It’s really not easy running something like this as there is a lot of pressure on you that people won’t take part and ignore it, and ignore me.

“I don’t know how people are ignoring it as it is for such a great cause, unfortunately there has been a lot of people ignoring my messages, leaving me on seen and not getting behind my back, which was quite tough to take as I need as much support as possible.

“But look, what can I do but just keep going and focus on what my goal is, which is to create as much awareness as possible for our student nurses and midwifes.”

And for anyone who isn’t on Instagram but wants to show their support to student nurses, Lynda has a very simple message: “If you’re not on Instagram and know any student nurses out there, maybe just give them a text saying ‘Thanks’ or ‘How are you’, as its really not easy for them at the moment.

“We all have to stay inside, watch Netflix and not move but these legends have to get up and be a part of this pandemic, witness nightmare scenes and do it all again the following day.”