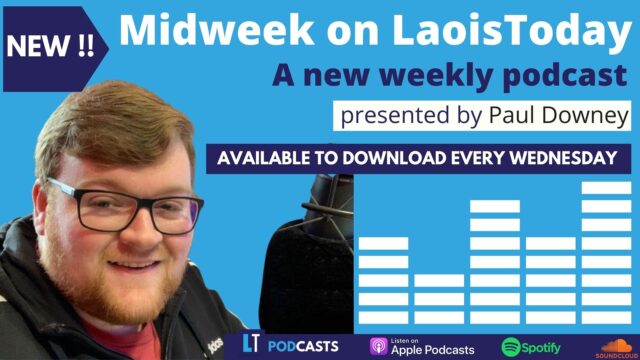 On this week’s LaoisToday Midweek Podcast episode, host Paul Downey chats with Seamus ‘Shay’ Dooley and Peter O’Sullivan from Portlaoise Panthers about their search for a new home, somewhere they can call their own.

They chat about their frustrations and what they want to see in the county.

Also on this week’s episode we catch up with Julie Anne Miller, the LaoisToday photographer that set off on her trip to Australia this time last on what it’s like being away from home during a global pandemic.

We also hear from Durrow man Davie Furey, who is no stranger to the stage, but who has has had to swap the stage for his spare room where he continues to write music and do what he loves.

Davie has a brand new album out called “Haunted Streets” and he tells us about that as well as performing, the pandemic and performing with family.

The LaoisToday Midweek Podcast is a new part of LaoisToday’s coverage with an episode available to download every Wednesday.

“Paul did two episodes for us at the end of 2020 and we’re delighted now that it’s going to become a regular element throughout 2021,” says Steven Miller, owner and managing editor LaoisToday.

“We’re always looking for new ways to connect with our ever-growing audience and we’re now producing three different podcasts with at least three episodes per week.”

As well as the Midweek Podcast, which is now available to subscribe to on Apple Podcast and Spotify, LaoisToday’s popular Talking Sport Podcast, hosted by Alan Hartnett, comes out at least once a week and often twice or more during the busy sports season.

This week we hear from Cahir Healy on his decision to call time on his hurling and football career with Portlaoise and Laois and end his commute from London.

Steven also hosts a weekly in-depth interview which is available to download on a Friday. Some of the recent guests on that have included Laois County Council CEO John Mulholland, comedian Bernard O’Shea, well-known local publicans PJ and Niamh Kavanagh and craft beer producer Paddy McDonald.

Below you can listen back to all of the previous episodes of the Midweek Podcast.

Portlaoise Panthers have been around for many years and are in search of new home, somewhere they can call their own. Seamus ‘Shay’ Dooley and Peter O’Sullivan are two club stalwarts and they speak about their plans and what they want to see in the county.

Julie-Anne Miller is a LaoisToday photographer and this time last year she set off on a trip to Australia. She spent time in different parts of the country and met some Laois people along the way. She spoke to her brother and former boss Steven Miller about her experiences in Australia and also how the pandemic affected her trip.

Durrow man Davie Furey is no stranger to the stage. Unfortunately he has had to swap the stage for his spare room where he continues to write music and do what he loves. Davie has a brand new album out called “Haunted Streets” and he tells us about that as well as performing, the pandemic and performing with family.

On the podcast this week, we speak with Dr Michelle Byrne of the Maryborough Family Practice in Portlaoise. She was in conversation with Steven Miller about dealing with Covid as a GP, the influx of calls the practice has received and how people are dealing with the pandemic.

Portlaoise Pantomime Group should be in full rehearsals for their 37th production, unfortunately it is not to be this year. Paul Downey speaks with Ciara Dollard and Vikki Byrne from the group on what Panto life is like, virtual Panto’s and performing on stage.

We speak to The Finns from Rathdowney about music, Covid19 and their future plans as well as a live performance of a great Christmas song.

Rathdowney’s Own is a brand new annual published by some Rathdowney locals and we speak to one of the members behind the book.

Steven Miller speaks to Brendan McDonald from Arles about his new children’s bedtime story, Elephant on the Farm.

And for the first time in 36 years, Michael Dowling a Publican from Mountmellick will not be opening his doors for Christmas. We hear from Michael and how he has been doing throughout the pandemic.

On the podcast this week we are joined by Steven Miller to talk about the week’s news stories including, Brian Stanley’s recent Dail statement, tickets for mass and the recent Laois GAA County Board appointments.

Also on the podcast this week, Mountrath native Jean Kennedy, joins us from Taiwan, where she is on tour with Lord of the Dance and we talk to her about her travels and performances to thousands of Irish dancing fans.

And finally, Portlaoise man James O’Connor, speaks to us about his new Christmas song, COVID19, his music and how he has continued to teach music during lockdown.