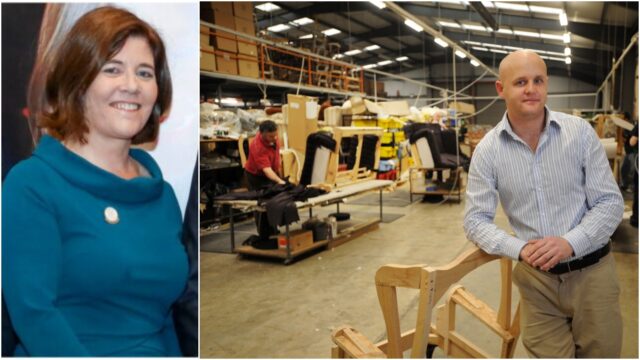 The Laois Chamber was only beginning to find its feet in early 2020 when the Coronavirus pandemic disrupted its early momentum.

Having only been officially launched in September 2019, they really announced themselves to the wider public with a hugely successful jobs fair in February before the lockdown measures put an end to their scheduled events.

Under CEO Bernie Everard, however, they managed to continue to engage with their members, via webinars, video interviews and weekly updates on the supports available to businesses.

The organisation’s first president Martin Crowley finished up his term at last October’s AGM, though remained in situ for a couple of months in a handover period before Ciaran Finane of Finline Furniture took charge.

And the group held their first event of the year this morning, which was addressed by both the new president and the CEO.

They looked back on some of the progress made in 2020, when they managed to increase their membership, and ahead to 2021 where they hope that some semblance of normality will resume as the year goes on.

The online meeting heard details of a virtual discussion that the chamber have planned for Thursday, January 28, with Gabriel Makhlouf, the Governor of the Central Bank, and Grainne McEvoy, Director of Consumer Protection.

The event will be an opportunity to discuss the issues faced by SMEs in Laois, Carlow and surround regions.

A new sponsorship with Gas Networks Ireland was also announced.

“It’s a huge privilege to be president and it’s not something I take for granted,” said Ciaran Finane, who is a director of Finline Furniture in Emo.

“It’s an awful shame we can’t have a proper event as I’m sure everyone is sick to the teeth of Zoom meetings but it is what is.

“I want to thank Martin Crowley, who was a brilliant first president and agreed to stay on for an extra couple of months. For a Cork man he has a huge passion for Laois and has amazing energy levels.

“The jobs fair was very much an initiative of Martin’s. It was a massive success and it’s a fantastic legacy of his presidency.”

Ciaran also mentioned the new additions to the Chamber’s board and said that they welcome engagement and ideas from the members.

He also had praise for Laois County Council, whose support was vital in getting the Chamber off the ground, but said there was a healthy dynamic between the two bodies. The Council have aided the chamber financially as well as providing an office in Lyster Square in Portlaoise.

“Any of us in business will have had our ups and downs with the council, but I can’t thank CEO John Mulholland enough for his work with the Chamber to date.

“It was his initiative to get the Chamber re-started in Laois again as we were one of only two counties that didn’t have one at the time.

“We were delighted with John’s help and with the help from Gerry Murphy (Council Director of Services) and Evelyn Reddin (Laois Local Enterprise Office).

“We appreciate the assistance but we’re not afraid to lobby on issues or grievances.

“Don’t think that we’re in the Council’s pocket – that could not be further from the truth.”

Ciaran said that in the current climate it’s understandable if businesses question the value of Chamber membership but he said “you could get a multiple of it back”.

“My reason for getting involved in the Chamber is to get more jobs to Laois and to support our members.

“We want to get businesses looking at Laois and our aim is to make Laois the centre of Ireland for business.

“I have always felt that Laois is the poor man in terms of IDA and jobs when you look at what has come to the likes of Westmeath, Kildare and Galway.

“We have as much and more to offer as those counties.” He added that a ‘Laois for Business’ document is being prepared and will be a vital resource in engaging with big businesses that may consider locating here.

“We have to get them to visit Laois, show them the area and what we have to offer. At least if we’re in consideration, that can lead to more jobs. That can only be good.”

He said that businesses have to be planning for a lot of events in the second half of this year, like the National Ploughing Championships and the Electric Picnic.

Evelyn Preston, Sales and Connections Manager at Gas Networks Ireland, also addressed the meeting to talk about their new partnership with Laois Chamber.

They have 9,000 customers in Laois, 300 of which are businesses, and said that they see Laois as an area with great scope for further growth.

“We see great potential in Laois. The county is now a suburb of Dublin and to support this your need key utilities.

“If companies are looking to come to an area, they will look at what utilities are in place.”

CEO Bernie Everard told the meeting that the Laois Gift Card that was brought in before Christmas had sales of over €90,000 and that many businesses availed of the vouchers as gifts to their staff.

“That was way beyond what we expected. It was kind of a rushed job to get it in for Christmas but it probably wouldn’t have been possible only for the Covid restrictions

“It received overwhelming support and that initiative is there now forever.”