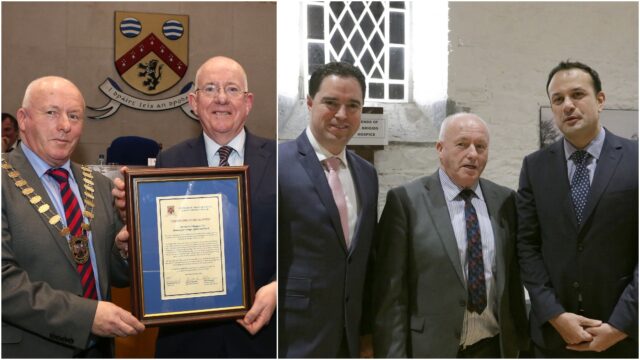 There have been warm tributes paid to retiring Fine Gael councillor Tom Mulhall, who announced his decision on Friday to step down from political life on health grounds.

Long-serving Laois-Offaly Fine Gael TD Charlie Flanagan and Minister for State at the Department of Agriculture Martin Heydon, who both worked closely with Mr Mulhall, have led the tributes while there have also been kind words from across the political divide from his fellow local councillors Aidan Mullins (Sinn Féin) and Paschal McEvoy (Fianna Fáil).

“It was with great sadness that I learned of the early retirement from Laois County Council of my good friend and colleague Cllr Tom Mulhall,” sasid Deputy Flanagan in a statement.

“It is also a very sad day for the electorate in the wider Portarlington-Graiguecullen area and especially for the Mulhall family and Tom himself.

“Cllr Tom Mulhall was a dedicated and committed public representative for many years. He worked 24/7 for his constituents in the Portarlington-Graiguecullen electoral area and he is widely respected for his role in politics and community affairs.

“It is also a sad day for the Fine Gael party as Tom as very proud of his membership.

“While there were many highlights to Tom career, we were all particularly proud of his year served as Cathaoirleach of Laois County Council in 2016/2017.

“On behalf of the Fine Gael party in County Laois, I wish Tom a return to good health and every luck for future endeavours for himself and his family. On my own behalf, I wish to thank Tom for his personal support to me in my career over the years.”

Minister of State and Fine Gael TD Martin Heydon has complimented Cllr Tom Mulhall on his tireless work for the people of Laois for almost 12 years.

“Since the boundary review in 2017 which brought parts of Laois into the Kildare South constituency I have worked closely with Tom on issues arising in the areas of Portarlington, Ballybrittas, Jamestown and Killenard,” said Deputy Heydon.

“Tom was passionate about politics and very determined to improve facilities and services in his area. Together we worked on projects which included fighting for an extension for Colaiste Iosagain,and securing funding for local sporting organisations and Portarlington Community Centre where he is a board member.

“The redevelopment of the Market Square was a priority for him and he was very excited about the prospects for the centre of Portlarlington.starting with the lease of the Market House in the square last year.

“I would like to thank Tom for his years of hard work and public service on behalf of the people of the Graiguecullen Portlarlington Municipal District.  I would also like to thank his wife Bridget and children Una and Niall for supporting his service.  I wish Tom and his family good health and good wishes for the years ahead.”

“Tom was without doubt one of the hardest working councillors in Laois if not the hardest,” said his local area colleague Paschal McEvoy (Fianna Fáil).

“He will be a massive loss to the people he represented so well during his 12 years on the Council. I personally had many a good debate with Tom over the years but we always remained good friends.

“I sincerely wish him well into the future and that his recovery will continue.”

“This had to be an extremely difficult decision for Tom and his family. Tom was one of the hardest working members of the Council and he enjoyed the cut and thrust of local politics.”

Mr Mulhall was first elected to Laois County Council in 2009 to the old Emo electoral area and then retained his seat in 2014 and 2019 in the re-drawn Graiguecullen-Portarlington Municipal District.

Fine Gael will now select a replacement for him on the council with the chosen person having three years to serve until the next Local Elections in 2024.