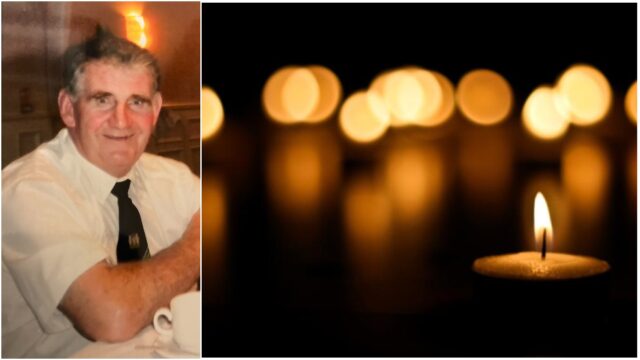 The death has occurred of John Miller, from Glenbawn outside Athy, a well-known and highly-regarded man on both sides of the Laois-Kildare border.

Aged 76, he passed away in Clover Lodge Nursing Home in Athy.

He is predeceased by his wife Mary (nee Carolan) and his brother Martin and mourned by his loving family – son John, daughter Catherine, daughter-in-law Yoomi, son-in-law Damien and grand-daughters Leona and Kayla.

He is also deeply regretted by his brothers Fran, Tony and Gerry, sisters Catherine, Statia, Agnes and Bernie, brothers-in-law, sisters-in-law, nieces, nephews, relatives and a wide circle of family and friends.

A kind, gentle, good-humoured man, John farmed all his life at Glenbawn, taking on the family farm in the mid 1960s following the sudden death of his father, also John. His son John has farmed the land in recent years.

A very talented sports man, John won an All Ireland U-21 football title with Kildare in 1965 and a Leinster junior in 1966. He also turned his hand to rugby and was a Towns Cup winner with Athy in 1984.

Indeed a sign of his versatility as a rugby player was that he started out as a winger and ended up as a prop.

An avid follower of all sports, he remained a committed supporter of his home GAA club Grangenolvin and Athy Rugby Club and was an active lotto ticket seller for both for a long number of years.

In 2018 he was given honorary life membership to Athy Rugby Club for his service to the club.

Because his father John had played football for Laois – and won a National League title in 1926 as well as three county championships with Annanough – John followed the fortunes of Laois and Annanough closely too.

He lined out with Annanough in his younger years until his prominence with Kildare at county level ensured that that was no longer an option!

And he had a keen fondness for both Laois and Kildare at county level, supporting both in their big championship games.

Due to government restrictions, a private family funeral will take place at 11am on Thursday morning (January 28) in St Michael’s Parish Church in Athy.

The mass will be live-streamed on www.parishofathy.ie. Burial afterwards in St Michael’s new cemetery, Athy.