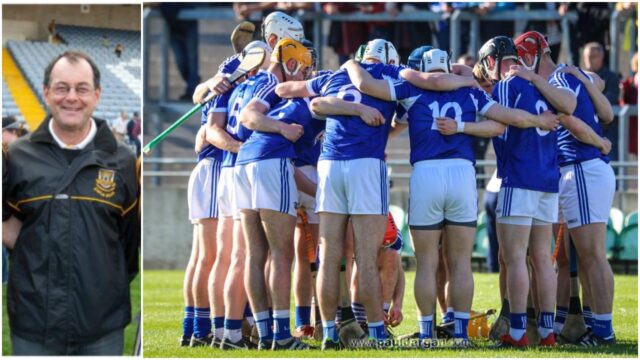 Mattie Collier from Camross will serve as chairman of the Laois Hurling Steering Group for 2021, taking over from Clough-Ballacolla’s Tom Clear who was in that role for the past number of years.

Collier, who has managed Laois underage teams and his native Camross in the past as well as being a regular delegate to Laois county board meetings, will also sit on the executive, the main decision-making body for Laois GAA.

The role is one of a handful of positions on the executive that is appointed rather than elected. John Kealy from Borris-in-Ossory is the secretary of the hurling group with a committee to be appointed later.

Killeshin’s Laurence Phelan continues as the football chairman with Ollie Byrne as secretary. Only the chairman sits on the executive.

The chairman of the hurling and football groups liaise with the Laois minor, U-20 and senior management teams. They are also responsible, in conjunction, with the Coaching and Games group, for the promotion and implementation of GAA at club and schools level.

As well as that, they organise an annual meeting between the county management teams and the clubs early in the year.

Meanwhile, Ollie Hally from Clough-Ballacolla and Sean Conroy from The Harps will once again be part of Enda Lyons’ management team with the Laois U-20 hurlers for the coming season.

Liam Kelly (Strength and Conditioning), Ruairi Carroll (Physio) and Martin Henneberry (team secretary and liaison) will also be part of the backroom team.