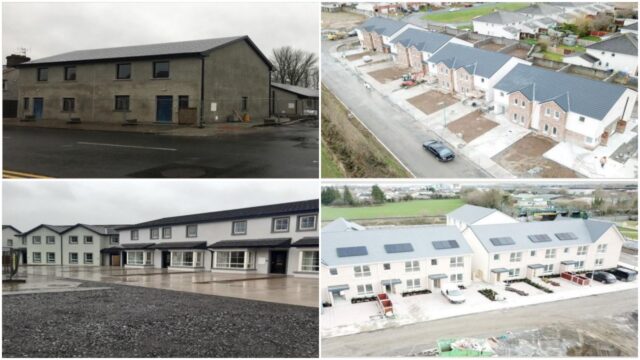 Mr Mulholland provided details of each project in a presentation at Monday’s meeting of Laois County Council.

Two of the largest developments are in Portarlington as 22 units is to be delivered in Ballymorris while The Glen Kilnacourt is to receive 18 units.

Portlaoise, unsurprisingly, is the town that is set to benefit the most with five projects set for completion.

Lake Drive Kilminchy, Clonroose Abbey and Holdbrook are to receive 10 units each. While Bellingham and Borris Road will each get nine.

The second biggest project in the county is in Ballickmoyler Road, Graiguecullen where 20 units will be delivered.

Sinn Fein Councillor Aidan Mullins, who admitted he has been one of the Council’s biggest critics in relation to social housing, says this is ‘rapid progress’.

He said: “I have to hand it to all of the staff in Laois County Council as they are really delivering on social housing in Portarlington.

“I once referred to the units in Ballymorris as being like the Pyramids because they were left standing for so long so I’m delighted they are almost complete.

“The same goes for Kilnacourt while I also believe a 26 unit development under the approved social housing body Oaklee is not too far away either.

“So this really is rapid progress that will benefit the people of Portarlington.”

He said: “I remember when I first joined in 2014 that if we gave out three houses it was a great thing.

While Independent Cllr James Kelly said that in Mountrath, some of the people who are moving into those houses are downsizing from bigger properties – thus creating opportunities for larged families to find homes.

He said: “I know of some who are downsizing from three or four bedroom houses.

“So that is why this is such a great scheme as it actually benefits more than just the person moving into the new home.”

Cathaoirleach Catherine Fitzgerald also welcomed the news and asked those who are on the housing waiting list but have missed out on this occasion, not to become disheartened.

She said: “The quality and standard of all of these new homes is simply amazing.

“I know amongst all this happy news, there will be people who are disappointed to miss out.

“But I ask those to please bare with us because we are getting there at a quicker speed than ever before.”