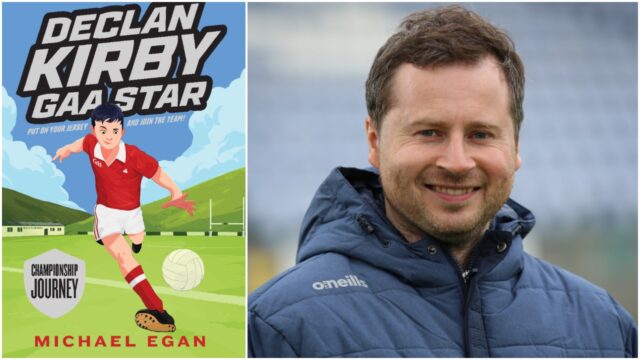 The influence and importance that teachers have on their students should never be underestimated and this was highlighted recently by Michael Egan, the Killenard man who secured a four-book publishing deal with Gill and McMillan.

Egan, who is now a primary school teacher himself, remembered in particular two teachers in Killenard NS who played a role in encouraging him to read and write more – and how they set him on the road to becoming a published author many years later.

His series of GAA-themed books, aimed at the 7-12 age group, are based on the adventures of its main characters Declan Kirby with books one and two set to be published in the coming weeks.

“In second class I had Martina Kelly. I vividly remember her reading the Fantastic Mr Fox so pretty enthralled by that. Roald Dahl is just a fantastic author,” he said when chatting recently on the LaoisToday Midweek Podcast.

“In 4th class we had Brid Maher and I distinctly remember her reading The Witches, Charlie and the Chocolate Factory.

“But in third class we’d a teacher called Brian Davis, a brilliant man, really enthusiastic guy. Local within the Killenard community though he’s actually from Emo. I think he had the lead role in Joseph and the Technicolour Dream Coat. Very creative.

“Every Wednesday in the class used to have to write a story – essentially a creative writing lesson. I think it was the first week and Brian would read out the best three – an and he picked out my one.

“I gained a lot of confidence from that. He was so respected in the school – if you got a compliment from Brian Davis it meant a lot. No matter what anyone said, Brian Davis thought you were good and that was good enough from my point of view. That’s where I got it from.

“I would have to pay tribute to Brian Davis. It’s amazing the impact that teachers have. Maybe I wouldn’t even have written these if Brian hadn’t to have done that.”

“Sometimes you have children who are very active. You give them a football, you give them a hurl and sliotar and they’d be out the back for an hour. They might come into the room or classroom but to get them to read for 20 minutes or half an hour can be difficult.

“But if you can create a subject matter that they are interested in that is going to hopefully be a vehicle for parents and teachers to get children to read more.”

And he said the importance of a series of books can encourage children to keep coming back for more.

“It’s not just one book and that’s it. It’s better if it’s a series. They’re after getting through a lot of pages, a lot of chapters, a lot of new words over the course of time.”

Currently he’s focused on finishing the third and fourth book and says he has an idea for a fifth.

And no doubt this project will influence children too – just as Michael was himself many years ago.

The podcast is available on Spotify below or wherever you get your podcasts.