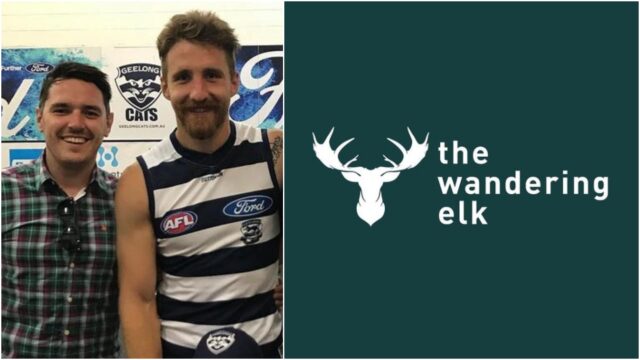 Aussie Rules star Zach Tuohy is set to open a new coffee shop in Portlaoise in a partnership with his long-time friend Murry Rogers.

The two Portlaoise lads will open The Wandering Elk on Bull Lane in Portlaoise in the same unit that the Bull Lane Coffee Shop and Deli was located prior to its closure last summer.

It will be a take-away only unit which their social media accounts say will have “speciality roasted coffee, epic gourmet grilled melts and seriously good treats”.

It is hoped they can open by mid April, though that may delayed somewhat as there are roadworks due to be carried out on Bull Lane whenever the Covid restrictions on construction are lifted.

Tuohy recently signed a new two-year contract with Geelong and has been in Australia since 2009.

But he maintains close links with Portlaoise and has always said it is his intention to return home to live at some stage in the future when his career comes to an end.

He told LaoisToday that living in Melbourne, which he reckons “is the best city in the world for coffee”, gave him an appreciation for quality coffee and that there is a gap in Portlaoise for this venture.

“We want to do it really well with exceptional coffee and hope to be able to expand and develop as time goes on,” said Tuohy.

Rogers also lived in Melbourne for a number of years but returned home to Portlaoise in recent years and works in the food industry in the midlands region.

Touhy’s new season with Geelong is due to get underway in late March where they’ll be hoping to build on last season’s Grand Final appearance.

Tuohy also enjoyed a significant season despite the Covid-enforced disruptions as he exceeded the number of games played by Tadhg Kennelly to go second behind Jim Stynes as the Irish player with the most AFL appearance. He also broke the 200-appearance mark, a significant mileston achieved by less than 5% of players who ever play the game.

Tuohy currently has 205 appearances behind Stynes’ 264 but there are 22 games in the regular season plus a maximum of four finals games. To beat the record, Tuohy would need to play quite consistently across the next three seasons.