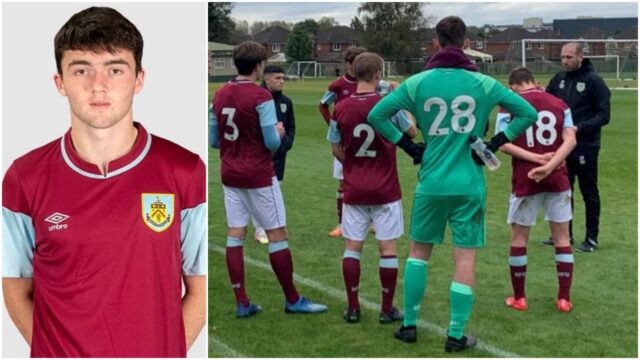 A Laois teenager is mixing it with the likes of Man United, Man City and Liverpool in the U-18 Premier League.

Ruairi Behan, who hails from Ballyfin, plays for Burnley in the top division of soccer in England at that level.

Ruairi, who plays as a midfielder, joined the Manchester based club at U-15 level.

He is the son of Joe Behan and Siobhan Culleton – who are also originally from Ballyfin but the family have been living in the Manchester area for the last number of years.

Behan penned a two-year apprenticeship with the Clarets in July of last year.

A winger by trade, Ruairi can also operate through the central midfield, was spotted playing grassroots football aged 14.

Behan featured for Tony Philliskirk’s side last season as an U-16, as well as competing in the Clarets Cup.

Burnley sit in 8th place in the table and face Leeds this weekend.

Behan has featured in 11 of their 19 games so far – assisting Burnley’s only goal in a 5-1 defeat to Man United back in September.

Burnley are still in the FA Youth Cup too – and will play Wimbledon next Thursday in the third round.