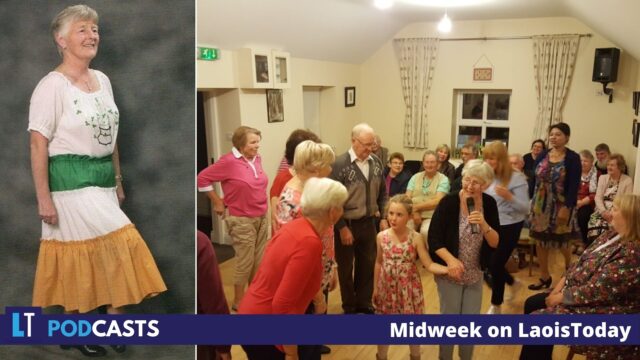 This Wednesday is St Patrick’s Day and one Laois woman is going to extraordinary lengths to bring the occasion alive not just for herself – but for many different people all over the world.

Maureen Culleton from Ballyfin, a legendary dance teacher and owner of the much-loved Sean Chistin rambling house, has been giving free lessons on Zoom over the past number of weeks and on St Patrick’s Day she will lead hundreds of dancers in a virtual ‘World of Dance’.

“It started very simply,” she said on this week’s LaoisToday Midweek Podcast, referencing a moment of inspiration while sitting on the couch.

“I said wouldn’t it be wonderful if dancers around the world could come together by Zoom on St Patrick’s Day at 12noon and dance our traditional step dance.

“I put a few words together for Facebook (and) my daughter said go for it. Within an hour at least 100 people interested and it grew and grew from there.

“Each Tuesday night, conduct free class on Zoom for people to learn to set dance.”

And among the 200+ participants have been dancers from Ukraine, Japan, the USA and Canada as well as from all over Ireland.

“It’s progressing very favourably,” she added. (It’s) giving me a great sense of satisfaction, it’s what I love since I was a young child.

“The project is gathering steam. A world of dance will be on Zoom. I’m delighted with the whole response to it. We’ll have a song or two, poetry – a concert like occasion. Thrilled I went with the idea and something people will enjoy from the Sean Chistin in Ballyfin.”

The Sean Chistin in Irey, Ballyfin, is an incredible project, one driven by Maureen’s energy. The building is where she grew up in, as an only child to Jack and Chrissie Drennan – but when she got married she moved to nearby Campclone where she reared her family.

But years later when the adjoining house to her home place in Irey came up for sale she bought it and with her husband, a builder, they combined the two properties, one that helped her recreate a rambling house of her youth and which could accommodate 32 dancers at a time.

“When I was growing up people came into my house to hear daddy playing the malojian, to play cards, to tell stories and I remember that as a child.

“I wanted to recreate this. There were four rooms in the house originally, it was very small.

“The great thing I recreated was the idea of the rambling house, of people together to promote the Irish culture. I’m so glad I did it, that the house wasn’t going to rack and ruin and it’s a lovely welcoming place for people who want to enjoy the simple things in life.

“This room accommodates a nice cosy rambling house setting. A nice area for people to sit down, and then a piece of nice flooring where people can dance, stand up sing a song, say a poem, tell a story.

“I think six or seven years ago we created the Sean Chistin. The Rambling House idea was going so well before the pandemic and maybe it might be the beginning of the rejuvenation to bring small groups.”

Maureen has been teaching dancing for years – having been first influenced by her parents at home and later by Michael O Duinn in Ballyfin National School – and has been immersed in Irish culture for all her life. But her enthusiasm remains as infectious as ever.

“I’ve always had a great love of dancing, music, all aspects of culture. Being involved in dancing doesn’t tire me – for me it gives me energy.

“It helps me keep sharp in my mind and keep my memory going.

“It’s amazing when you’re very happy doing what you’re doing, the energy flows and the ideas come in. I love what I do.”

Running a summer school in Ballyfin for the past number of years has opened her up to people of similar interests all over the world. And the invitation to travel back to these far flung places have come thick and fast too where she says “people treat you like a queen and you spread good news of the culture of Ireland all over the world”.

“Dancing and music has always been there for me,” she adds. “From that humble beginning I have been very lucky to go around the world and enjoy every second of what I did.”

You can listen to the episode in full below on Soundcloud from 16 minutes or subscribe on Apple Podcasts or Spotify to never miss an episode.