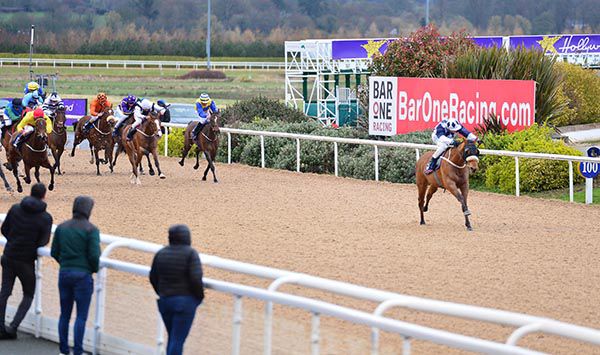 A 28/1 winner in January, a Laois owned horse galloped to his second victory in his last three races in Dundalk last night.

Never Mistabeat was a comprehensive five length winner at the Irishinjuredjockeys.com Handicap to scoop the €6,000 first prize.

There was no surprises this time as the Jarlath Fahey trained horse went off the 9/4 favourite.

It is a great time for the Faheys as brother Peter trained Belfast Banter to win the County Hurdle at the Cheltenham Festival.

Never Mistabeat is owned by the Park Hill Racing syndicate which is run by Abbeyleix native Jamie Whelan.

And it was his cousin Ronan Whelan who was the jockey that steered the horse to victory last night.

Members of the syndicate are from Laois, Kildare and Westmeath and the horse is trained by the aforementioned Fahey in Monasterevin.

While this is only Park Hill Racing’s second ever win, organiser Jamie Whelan is no stranger to horse racing.

He has previously been involved in the high class multiple winners Sea The Lion and Balladiene.

Speaking to IrishRacing.com, trainer Jarlath Fahey was delighted with the win.

He said: “It’s great to get another win out of him. He was impressive again and is a horse that is learning on the job.

“The blinkers have worked and woke him up big time. They have focused his mind.

“He’s a fine big horse and we gave him a year off to grow into himself. We’re getting the benefit of that now.

“We’ll see what the handicapper does and he’s in for another hike again. Maybe he could run here on the Finals day over a mile and four or we could go on to the turf with him.