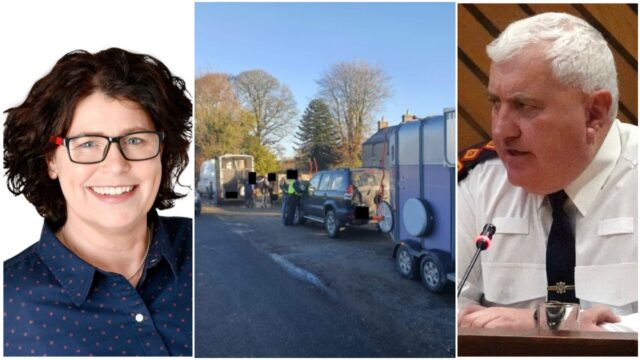 Laois County Councillor Aisling Moran has continued with her efforts to have sulky racing stamped out in Laois.

At last week’s Graiguecullen-Portlarlington Municipal meeting, Cllr Moran raised the issue of racing of a single horse and trap on rural roads near Ballickmoyler, Knockbeg and Sleaty.

The Fine Gael Cllr went further yesterday and brought a motion to the full sitting of Laois County Council, calling on Chief Superintendent John Scanlan and his force to act.

She said: “I am calling on the Council to contact the Chief Superintendent to put in place measures to confiscate horses that are not registered or chipped, in particular in relation to sulky racing on backroads all over the county as this is a serious health and safety issue and needs to be addressed.”

Cllr Moran’s motion was seconded by Cllr Padraig Fleming who explained that many of the people who live on the rural roads concerned are fearful of an accident involving a sulky race.

Cllr Moran expressed her surprise of when she pursued the matter to see who was the relevant authority to deal with this, it was neither the gardai or the Department of Agriculture that she was sent to – instead, it was the Department of Housing of Laois County Council.

“How does it not fall under the remit of the Gardai and the Department of Agriculture jointly.

“The problem needs to stop being passed around and both the Department of Agriculture and the Gardai need to step up to the mark and find a solution to this serious animal welfare, road safety, public safety, health and safety and child protection issues, to name a few.

“It has been highlighted so many times now that it seriously needs to be addressed.

“The fine should be enough to cover the cost of keeping the horse in a shelter. Then, if and when the horse is fostered out to a good home, the person fostering should after a year be allowed to be the registered owner of the animal.

“At the moment if a person fosters a horse they are not allowed to be the registered owner. This rule stops a number of people fostering horses.

“We need to make sure that these animals are housed and treated properly. We need to change the bye-laws to make this can all happen safely.

“If sulky racing is so popular then it needs to be regulated and events held in proper race tracks that are in line with proper health & safety regulations ensuring the safety of the horse and the rider, like all other events in sports of this kind.”

“There is ongoing liaison between Laois County Council and An Garda Síochana as part of their implementation of the relevant legislation and byelaws.”