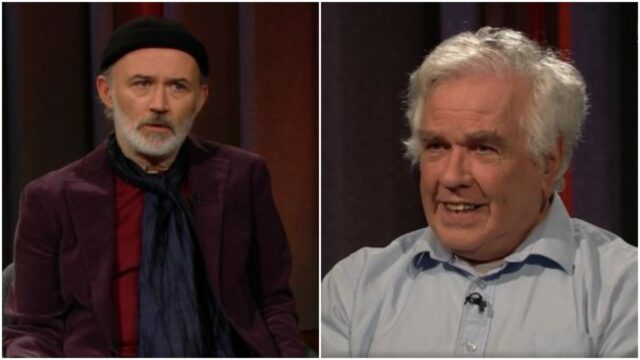 Tommy Tiernan has inched ahead of Ryan Tubridy in the battle for RTÉ’s weekend viewers after his most recent show clocked up 12,000 more audience members than the chat-show host.

I really enjoy the show. Tommy is a remarkable listener, empathetic and his connection with people is most inspirational.

Fr. Peter McVerry SJ made quite an impact with his interview on The Tommy Tiernan Show on Saturday April 10.

In the course of a 15-minute conversation with the host, Peter described his relatively privileged upbringing, his attraction to the Priesthood, and his passion for a just social order, especially when it comes to the homeless and other people living on the margins.

Although he received a good-quality private education, he said, his real education began in 1974 when he saw the appalling conditions of life in Dublin’s inner city. It changed everything for him.

He has dedicated his life since then to working for the homeless, living among them in a flat in Ballymun, Dublin. The lack of political will and the destructive neoliberal faith in the market to handle housing issues makes him deeply angry.

Specifically, Peter explained how his experience of poverty in Dublin led him to abandon the legalistic idea of God which he had held up to then.

In a telling anecdote, he described how one young man in the inner city said to him, “The very thought that there might be a God depresses me”. Peter understood this to mean that the man believed in a God of the law, a God who has laid down rules and laws that one had to live by.

“And he had broken every one of them,” Peter added with a laugh, so he imagined God looking down and seeing him as unlovable, as a bad person for breaking the rules. What Peter saw, however, was that the young man had suffered an abusive and violent childhood and extreme neglect.

“If there is a God,” he concluded, “this kid must have a special place in God’s heart, because of what he has suffered.” So gradually, Peter said, he came to reject the God of the law and to believe in a God of compassion.

In response to Tommy Tiernan’s question about how ordinary people who have a reasonably comfortable existence, even if weighed down by mortgage payments and the like, should respond to the present situation, Fr. Peter commented that he was not looking for them to give away all their possessions but that they should try to live simply and share generously.

Tiernan opened the conversation saying “I have this feeling that you’re one of the only people in public life that we can trust”.

Something of that same confidence in Peter’s goodness and authority was evident from the social media response to the interview too.

Michael O’Regan, a journalist with The Irish Times tweeted, “When will governments listen to Fr. Peter McVerry? Great interview with this great man who has dedicated his life to the marginalised.” And Sean Kelly MEP remarked, “It was humbling and refreshing listening to the wonderful Fr. Peter McVerry”.

Other comments on social media included: “The thing about Peter McVerry is the fire never goes out. Never. Sometimes the rest of us feel the fire gone out and that’s when we know we’re struggling but with him never. Inspirational”.

“Father Peter McVerry embodies the best of social activism and the best of Christianity. A really excellent and flowing interview as ever by Tommy Tiernan”.

“It’s not popular to say this but Father Peter McVerry gives me faith that people associated with religion still have a role to play in this country. I also think and want to respect two of my Grand Aunts who as Nuns gave their lives to the poor of the inner city”

“A revealing interview with the wonderful human being who is Peter McVerry.”

“What an inspirational Irishman. Every word Fr. Peter McVerry says makes complete sense but the establishment have no interest in it, full of compassion, so much insight in every sentence, absolutely inspirational man, a proper hero. Peter McVerry must, objectively, be the best man in Ireland. Surely he’d be a shoo-in for president”.

A prayer for Healing
Every day I need thee Lord, but this day especially,
I need some extra strength to face whatever is to be,
This day more than any day, I need to feel you near,
To fortify my courage, and to overcome my fear.
By myself, I cannot meet the challenge of the hour,
There are times when humans help, but we need a higher power,
To assist us bear what must be borne, and so dear Lord, I pray,
Hold on to my trembling hand, and be near me today.