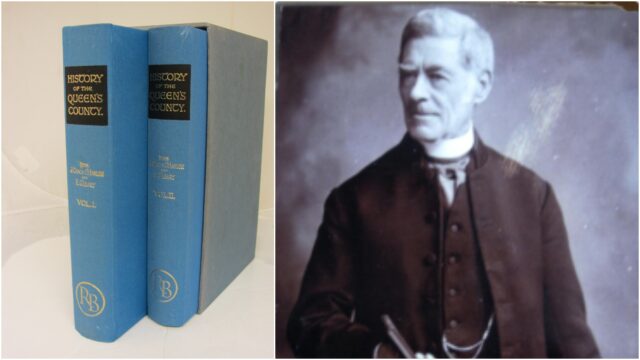 On 30 April, 1821 – two hundred years ago – John O’Hanlon was born, the first of eight children of Edward Hanlon and Honor Downey.

The O’Hanlon home was one of a series of houses now occupied by the Presentation Convent building beside the Church of the Sacred Heart, Stradbally.

He lived until the age of 84 and when he died at the presbytery in Irishtown in Dublin in May 1905 as parish priest of Sandymount he left behind an impressive legacy of achievement as a priest, writer, historian, folklorist, poet and promoter of the Irish language.

His priestly career comprised his curacy in three parishes in Missouri, one in Dublin before his promotion to parish priest of Sandymount in 1880. He was raised to the position of Canon in 1885.

During his lifetime he penned numerous scholarly articles but he is best remembered for his many published books – 28 in total, three of which were published after his death.

Today these publications are regarded as rare books and they fetch significant prices at rare book sales in Ireland and abroad.

Lives of the Irish Saints

Most famous of them all was O’Hanlon’s “Lives of the Irish Saints.” The first volume of this monumental work was published in 1873.

Between 1873 and the time of his death in 1905, the full volumes for the months of January to September and a partial volume for October were published.

These vast works involved deep research and they have left a rich and comprehensive account of the lives of most of Ireland’s saints including, for example of local interest, St. Fintan of Clonenagh and St Colman of Oughaval, Stradbally.

Volume Three, for the month of March, was the largest volume running to 1,036 pages, 432 of which were dedicated to the life of St Patrick.

Within the ten volumes were almost six hundred sketches, 128 of which were drawn by O’Hanlon himself, thereby showing his artistic skills.

Having dedicated a significant portion of his life to this project, it was a source of great disappointment to him to realise at the turn of the century that time had caught up with him and that he would never live to see the entire work through to completion.

History of the Queen’s County

Here in County Laois, O’Hanlon is renowned for his “History of the Queen’s County” the prospectus of which was published in 1902.

The work was eventually published in two volumes, the first of which appeared in 1907 setting out the history of the Queen’s County up to 1557. The second volume from then up to the end of the 19th century was published in 1914.

Both volumes were published after O’Hanlon’s death following his death-bed appeal to his friend Fr Edward O’Leary of Portarlington to complete the work.

Folded coloured antiquarian maps of the county were published in both volumes. In writing the preface before his death O’Hanlon alluded to his roots:

“The want for a History of the Queen’s County has long been complained of, and fearing that no more competent person was likely to engage on the labour and research requisite to supply that deficiency, the present writer for many past years had conceived the project of collecting and procuring materials for the preparation of such a work.

“A native of the county himself, and familiar from birth with its scenes, people and associations, the subject had for him an interest altogether special, and opportunities were afforded by a long-continued residence in and near Dublin for constant and ready access to all its public libraries.

“From their numerous manuscript and printed sources have been gleaned the records and information that mainly serve to illustrate its archaeology, topography and chronological sequence of events, from the earliest known period down to the present day.”

Legends and Poems by John Keegan

Another invaluable work of John Canon O’Hanlon which had a strong association with County Laois was his “Legends and Poems by John Keegan” published in 1907, two years after his death.

Keegan of Killeaney, Shanahoe had lived from 1816 to 1849 and his writings originally appeared during his lifetime mainly in newspaper publications such as The Leinster Express, The Nation, The Irish Penny Journal and The Irishman.

O’Hanlon, who was familiar with some of Keegan’s writings as a reader in his youth of The Leinster Express in the 1830s set about collecting and publishing together all of Keegan’s works.

Thanks to the efforts of O’Hanlon, the forgotten writings of John Keegan were brought to life to a readership of the 20th century and Keegan’s most famous work, Caoch The Piper, telling the remarkable story of the blind piper Caoch O’Leary and his dog Pinch, was included in national school readers for many years thereafter.

An event that he attended as a fourteen years old boy at the Heath was to have a lifelong influence on O’Hanlon – it was the great Daniel O’Connell speaking at one of his infamous monster meetings – sowing the seeds of O’Hanlon’s interest in politics. Writing his poem “The Land of Leix” many years later he described the event in a footnote:

“Allusion is made to the political tour of Daniel O’Connell to the Queen’s County in 1836, when a vast assemblage of the people awaited his coming at the Great Heath of Maryborough, when he arrived by the Limerick coach-road from Dublin.

“Amid a downpour of rain they formed in procession around his travelling carriage; a long train of vehicles and horsemen moving slowly to keep pace with the numbers on foot, until they reached Stradbally, when he addressed the multitude from a platform, erected on the wide street near the river, and opposite the house of Mr John Kelly.”

O’Hanlon’s interest in Daniel O’Connell was thereby ignited and it was to feature prominently in his life many years later.

In 1862, with O’Connell long since dead, O’Hanlon was elected Honorary Secretary of the newly formed O’Connell Monument Committee.

For the next quarter of a century, he devoted a considerable amount of his energy to this project which successfully achieved the erection of the O’Connell monument which stands at the south end of O’Connell Street (then called Sackville Street) in Dublin.

The monument was unveiled on 15 August, 1882 and the Committee delivered it over to the Lord Mayor and Corporation of Dublin. O’Hanlon subsequently published in 1888 the “Report of the O’Connell Monument Committee” setting out “the Report of Proceedings in relation to the origin, prosecution, and erection of the O’Connell National Monument, in the City of Dublin.”

This publication gave an impressive and detailed account of all of the activities of the Committee, including fundraising, and it shed a light on the extensive labours undertaken by the Committee over a lengthy period.

One of the noteworthy resolutions passed by the Committee is a fascinating one in relation to the inscription on the face of the monument which, despite the Monument’s impressive size, bears only one word.

“That this movement, having originated in a sincere desire to do honour to the memory of an illustrious Irishman, every effort of whose life, whether in the senate, at the bar, or in the public forum, bearer the unmistakeable impress of greatness, the Monument which shall be raised by the contributions of his grateful countrymen, and of the admirers of genius and patriotism throughout the world, shall bear no other inscription than the simple but comprehensive word O’Connell.”

John Canon O’Hanlon died on May 15, 1905, and he was interred in Glasnevin Cemetery.

His successor priest in Sandymount parish quickly set about erecting a suitable monument in O’Hanlon’s memory.

Given his extensive labours on two of the most outstanding projects of his lifetime – the O’Connell Monument Committee and the acclaimed Lives of the Irish Saints – there was great significance that he passed to his eternal reward on May 15.

This date was the anniversary of the death of Daniel O’Connell who had died in 1847. It was also a significant date locally in Stradbally.

According to O’Hanlon’s entry in Volume 5 of his Lives of the Irish Saints, 15 May marks the feast-day of St Colman of Stradbally – O’Hanlon’s place of birth 84 years previously in 1821. It certainly is food for thought!