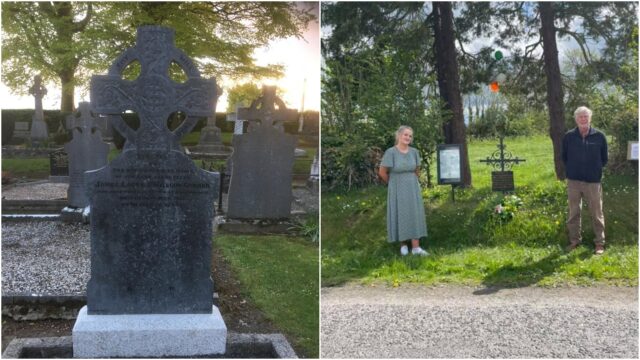 Last Sunday in Barrowhouse – a quiet, rural, area between Athy and Ballylinan – there was a poignant moment as the church bells rang and wreaths were laid on two local historical sites to mark the 100th anniversary of the Barrowhouse Ambush tragedy.

On May 16 1921, two young local men – William Connor and James Lacey – lost their lives in the War of Independence in a planned ambush against an RIC group that were travelling through the area.

The two men had been born on the same day in April 1895, gone to school together in Barrowhouse and joined the Irish Republican Army in the fight against the British Forces.

One hundred years later the family connections remain in Barrowhouse and Nessa O’Meara, a great-grand niece of William Connor, is currently piecing together a book on the history of the subject.

She joined the recent LaoisToday Midweek Podcast to talk about the ambush and how she came to be writing the book about it.

“One thing the Irish guys and ladies had was that they knew their landscape and that was exactly the same in Barrowhouse,” explained Nessa.

“The brigade in Barrowhouse fell under the Carlow brigade – there was no boundaries, it was just whatever way the companies fitted in.”

“The men we are speaking about were part of the B company – 5th batallion of the Carlow brigade. Quite a few members but in the Barrowhouse Ambush about eight local members took part on that particular day.

“The guys basically planned an attack on local RIC that usually travelled through Barrwhouse.

“It was a retaliation attack from an event that had happened not so long before the ambush.

“A lot of people call it – that narrative is out there that it was a failed ambush – but I think when we look back with a more contemporary view we begin to understand, it wasn’t a failed ambush. These guys were risking their lives and some lost them.”

Nessa explained that the original site of the ambush was close to the school in Barrowhouse, but because the children were due to be leaving the premises at the time of the planned ambush, they decided to move to a different location.

“It was risky for them to conduct the ambush there,” she says.

“I suppose when they did move from that location and ended up where the site is now … it resulted of course James Lacey and William Connor dying.

“We’re at this time in history especially with my generation and younger we have this open dialogue where we’re able to say what happened, how did it happen and these guys need to be remembered.

“We’re looking back on history and we’re saying ‘let’s give these guys some recognition that they deserve’.

“It’s a lovely narrative around the relationship between the two boys. The information came down through the generations. They were born the same day, went to school together, died together.

“Their own family homes were just a stone’s throw from each other – they were both born in the month of April, joined the Irish Volunteers, fought together, died together and it’s pretty deep to see that relationship growing up from kids to young men to adults.

“So for the locals it’s pretty important even for the men who survived the ambush. There are a lot families still in the area. For instance, the Laceys are still in Barrowhouse. The Connors, I would be that connection.

“The Dooleys, the Mahers, the Ryans are still in the area – it’s very much still part of the blood that runs through Barrowhouse that these men are still remembered.”

And it was Nessa’s gran-aunt Mary that encouraged Nessa, who is a history teacher, to write the book.

“I would have always gone to visit my auntie Mary. She was actually my gran aunt, but always called her my auntie.

“She lived just outside Ballylinan but she would have been originally from Barrowhouse. She was a great woman and we would always have had great conversations and great craic.

And when Mary passed away, Nessa said simply: “I have to do this”.

“I wanted one source to document the whole Barrowhouse Ambush but I also wanted to marry the idea of the impact that had on the families that were left behind and the broken hearts of their mothers and how that impacted them.

“I think sometimes history where we tell the facts, warts and all, we exclude the pain that is left behind.”

She says the event last Sunday was a simple one.

“Simultaneously when this was going on we rang the church bells so the neighbours could hear the bells even though they couldn’t be with us that day.

“It was slightly eerie because all you could hear was the bells but there was something very poignant about it too – it was beautiful. Hopefully when restrictions are lifted can give a good commemoration to William Connor and James Lacey.”

She hopes the book will be ready by August and there are plans for a bigger commemoration. The local community are also applying for planning permission to erect a monument on the road where the ambush took place.

And for generations to come, the local historical significance will be properly documented.

“(We’re) putting something out there that goes in to the history books.”

You can listen to the interview with Paul Downey on the Midweek Podcast below on Soundcloud or by subscribing on Apple Podcasts or Spotify.