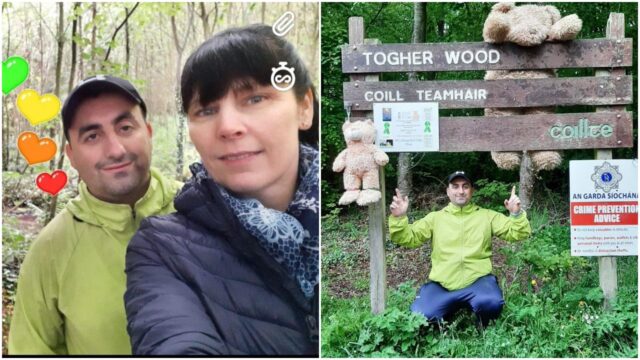 A Laois mental health advocate and his partner have launched a second ‘wipe your worries away’ teddy bear walk.

Earlier this month, Mark Condon and Bernadette Donovan established a walk in the Cathhole Falls in Ballyfin – and now they have followed that with one in Togher Woods in Portlaoise.

Mark, from Ballycarroll outside Stradbally, went public on his 22-year battle with depression one year ago.

He, following the tragic death of his friend, posted a video urging people who are struggling to talk to others, or him, in a bid to get some help.

Since then, Mark has created two Facebook pages and a YouTube Channel which have amassed thousands of followers.

Posting off his own personal account recently, Mark and Bernadette, unveiled their latest project in Togher Woods.

Mark previously explained the concept of how it is hoped that this project will help people.

He said: ” The Teddy Bear walk ‘wipe your worries away’ is something completely different.

“We have a whiteboard where people can come and write down whatever it is that is troubling them and then simply wipe it away.

“For children, sometimes they may not be able to explain what their worry is so an adult can bring them here and see what they are writing down in order to help them overcome whatever difficulty they are dealing with.

“It can also be a family adventure spot and we would ask that everyone please respects the bears and the whiteboard and do not damage them in any way.”

This Teddy Bear walk is a 1km loop that begins at the main entrance into the wood.