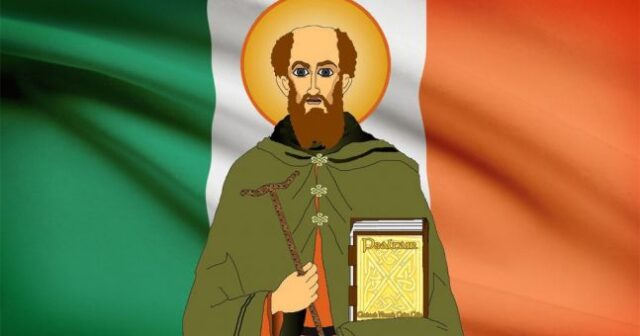 St. Colmcille (also known as St. Columba) is one of Ireland’s patron saints, a distinction he shares with St. Patrick and St. Bridget.

He was born in Gartan, County Donegal in 520 (or 521). There are many sites associated with the life of the inspirational ‘Colmcille’ and also dedicated to him throughout Derry and Donegal.

In 545, he founded his first monastery in Derry / Doire Cholm Cille – and in 563 set sail with twelve monks from Derry to the island of Iona in Scotland where he died in 597.

Firstly, he has an interesting name. Colm means a dove – and that may or may not have been his birth name. But the name Colm has a distinguished pedigree because the word in Hebrew for a dove is Jonah.

Those two men were brought up in the faith of their ancestors and both were somewhat reluctant missionaries in a foreign country. Jonah was sent to Nineveh where he had little confidence that his message would have any effect and ended up being throw into the sea, as he tried to escape God.

Columba, too, had trouble with the sea as he set out to take on a very difficult task, partly in penance for trouble that he had been involved in.

And tradition tells of the saint challenging a monster on Lough Ness. We all have our plans but we share with Columba a strange faith in a God who can write straight on very crooked lines, a God who can build peace even in conflict situations, who can calm the worst of stormy waters.

For me this means that where the Irish church is at present is a graced place, not a place of disaster. For those who believe in a God of forgiveness, our mistakes and stupidity can be places where divine foolishness is wiser than human wisdom.

People become saints, not because they are perfect but because they allow the grace of God to weave something beautiful out of the imperfections of their lives and do great things with and despite them.

In their failures Columba and Jonah discovered a God whose weakness was stronger than human strength. Holiness comes forth when we allow God to chisel away at our lives – often in painful ways – and allow little nuggets of divine beauty to sparkle.

Columba chose Iona because it was s place where he could not see Ireland. We too have to find out own Iona, our place where we cannot look back to former glories and be led by the grace of God to places that we cannot see.

Secondly, Columba showed himself to be a wise leader. He took responsibility for the deaths that arose because of the battles that he and his people were involved in, especially since the alleged basis for the battle was a dispute over a religious book.

Down through history people have fought over issues that were seen as being more important than people. We see leaders, sometimes religious leaders, who achieve positions of power by exploiting the fears and anger of others.

Columba showed a form of leadership that was born of his being prepared to suffer by going into cold, challenging exile. The best of leaders – like Jesus – do not ask others to do what they will not do themselves.

One of St Paul’s letters talk of Jesus emptying himself of his divinity and becoming human – and then humbling himself even further to accept death on a cross. (Philippians 2:6-11)

Thirdly, Columba was a man of prayer. Prayer is sometimes seen as a silly childish attempt to wring favours from a distant or non-existent God. For Columba prayer was a discipline that moulded his heart in the image of the Lord who is the compassionate and gracious God, slow to anger, abounding in love and faithfulness (Exodus 34:6).

There is no contradiction between a life of prayer and a missionary heart. For Columba, prayer was not an escape from reality but a call to go out. Those who face the long inner journey involved in a deep spiritual life are then able to undertake long outer journeys into unknown and challenging territory.

It is not surprising that our culture, which promotes access to information about the whole world, is going in the direction of great local fragmentation and loneliness, where lives at the earliest and latest stages can be discarded as of no value.

We have the crazy situation where people can have a thousand friends around the world and none around the corner.

Jesus calls us in our own deserts and on our own Calvaries, not to seek to escape reality but to face it with faith in a God who crossed the stormy seas with us. Real prayer calls us embrace reality with courage, knowing that God in Jesus is in the midst of it.

Columba faced the same human crises and regrets, challenges and idealism that people face in every generation. Circumstances change but human beings don’t.

He would ask us who celebrate his memory to seek God in going out from our comfort zones, to offer loving, generous leadership at every level in society and to seek God prayerfully in both the windswept and the sunny days of our personal Iona.

And if we do that we will be a blessing on today and on the tomorrow that we seek to create for our children.