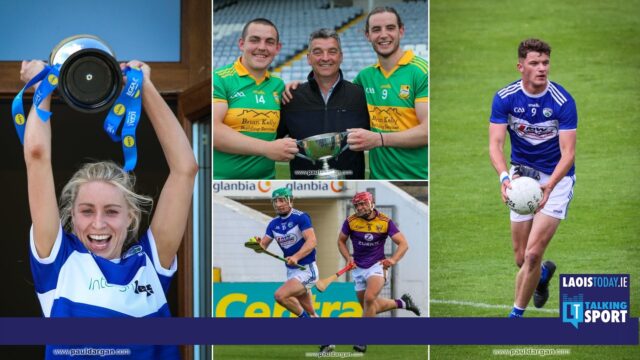 It was another busy weekend of local GAA action with pride of place undoubtedly going to the Laois ladies footballers who claimed the Division 3 National League title with a thrilling win over Kildare on Sunday.

In an epic battle in Baltinglass, Mo Nerney popped up with the winning point with less than a minute of normal time remaining.

It was a heroic performance from Laois all round as they got the better of their neighbours for the the third time in a row – with this win also sealing promotion to Division 2 for 2022.

It also sets them up perfectly for the All Ireland intermediate championship – where Kildare and Roscommon, the side they beat in the league semi-final, in their group.

We hear from manager Donie Brennan while Steven and Alan look back on the game.

We also hear from Laois hurling manager Seamas ‘Cheddar’ Plunkett in the wake of their disappointing 5-31 to 1-23 loss to Wexford in the opening round of the Leinster championship, a result that means they now have to beat Antrim in two weeks time to avoid dropping to the Joe McDonagh Cup competition once again.

As well as that Alan goes into detail on the Laois minor footballers’ dramatic penalty shootout win over Wexford on Saturday.

And finally, we discuss Park-Ratheniska’s Laois junior football championship win on Friday night and hear from their manager Kieran Kelly, chairman John Kelly, captain Mark Delaney and top scorer Kieran Delaney on what the success means for the club.

You can listen to it in full below or by subscribing on Apple Podcasts or Spotify.