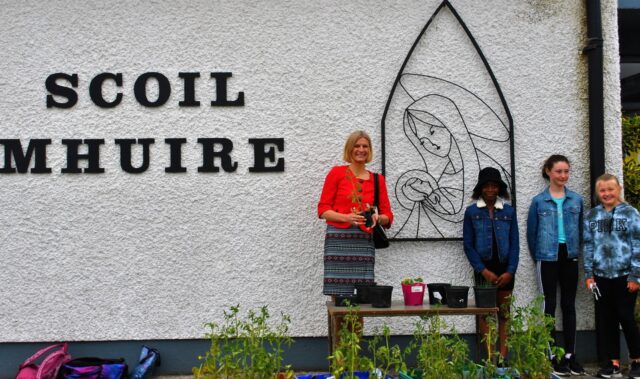 Following a visit to Scoil Mhuire in Abbeyleix this week, Senator Pippa Hackett has again called on the Department of Education to take immediate action to repair the school building.

“Pupils from third class told me they avoid using their bathroom because of the smell and they can’t wait to move out of their classroom,” she said. “Principal Aiden McEvoy took me through the school to show me the terrible physical state of the building.

“Conditions are truly dreadful and I now hear that the principal has taken the decision to close two mainstream classrooms on health and safety grounds.

“The school is breaking for the summer shortly and it’s imperative that something be done to improve this school before pupils return in late August.”

Senator Hackett previously wrote to Education Minister Norma Foley about the situation but is now urgently reiterating her request that something be done.

“Despite this difficult past year and with all the problems in the school, the wonderful students and teachers at Scoil Mhuire have shown great resilience,” she added.

“To mark the end of term, the school were hosting a Summer Plants Sale where beautiful bedding and tomato plants, grown by the children during the year, were on offer.

At one stage, there were up to 350 students in the school but newer facilities in the two other schools in the parish – the Church of Ireland Abbeyleix South and Ballyroan – have seen their numbers grow.

“We’re not trying to rabble rouse but we need a new building for students and staff and we have to get this kickstarted,” said principal Aidan McEvoy previously.